A new type of atoms have been discovered in a far away planet. They’re called Jezz atoms. You’re trying to send a sample of them back to Earth.

Jezz atoms, however, can only be sent tightly packed. The tighter you pack them, the more galactic credits you’ll get. 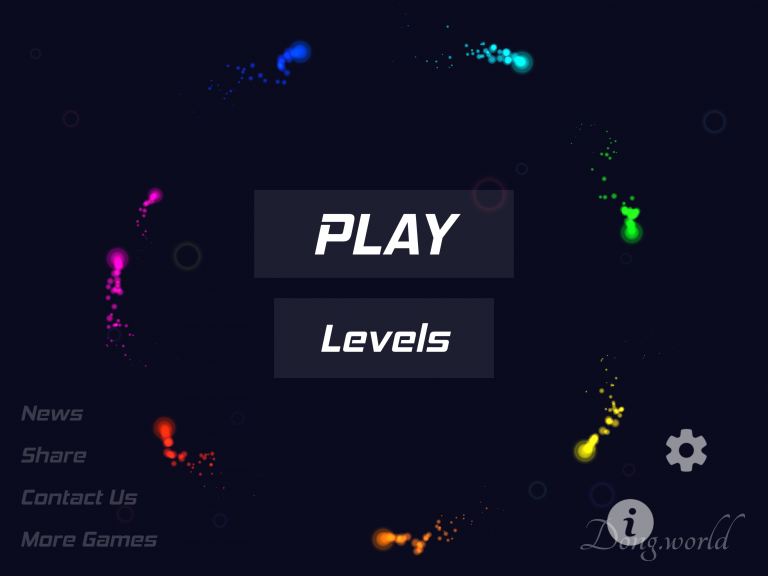 The game is inspired by JezzBall game from 1990s.

The main goal of the game is to capture a certain percentage of the area (listed in top-right corner) of the field by building walls. Walls can easily be destroyed by Jezz atoms, so you need to be careful. An area is captured if there are no atoms in it. 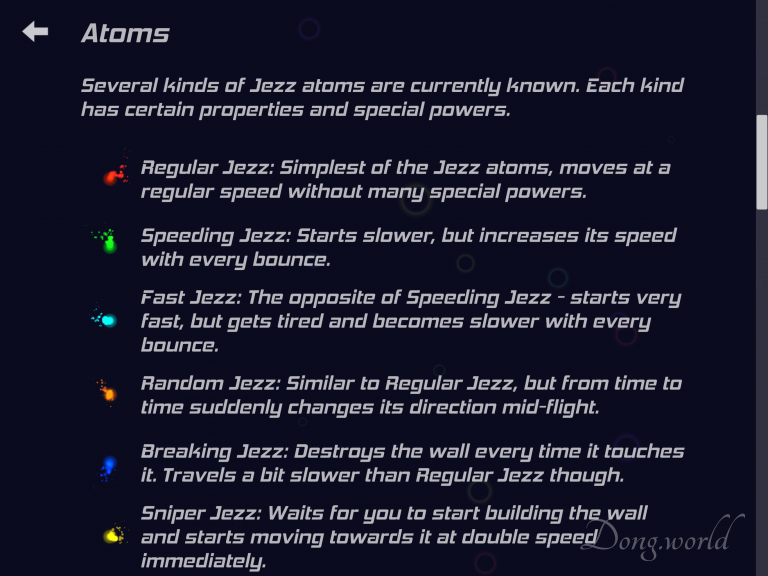 Several kinds of Jezz atoms are currently known. Each kind has certain properties and special powers.

– Regular Jezz: Simplest of the Jezz atoms, moves at a regular speed without many special powers.
– Speeding Jezz: Starts slower, but increases its speed with every bounce.
– Fast Jezz: The opposite of Speeding Jezz – starts very fast, but gets tired and becomes slower with every bounce.
– Random Jezz: Similar to Regular Jezz, but from time to time suddenly changes its direction mid-flight.
– Breaking Jezz: Destroys the wall every time it touches it. Travels a bit slower than Regular Jezz though.
– Sniper Jezz: Waits for you to start building the wall and starts moving towards it at double speed immediately.
– Father Jezz: Spawns children Jezz atoms at certain points of the area fill percentage. Can spawn up to 3 children.
– Baby Jezz: Smaller than a Father Jezz, does not spawn other babies, but can still easily destroy your walls. 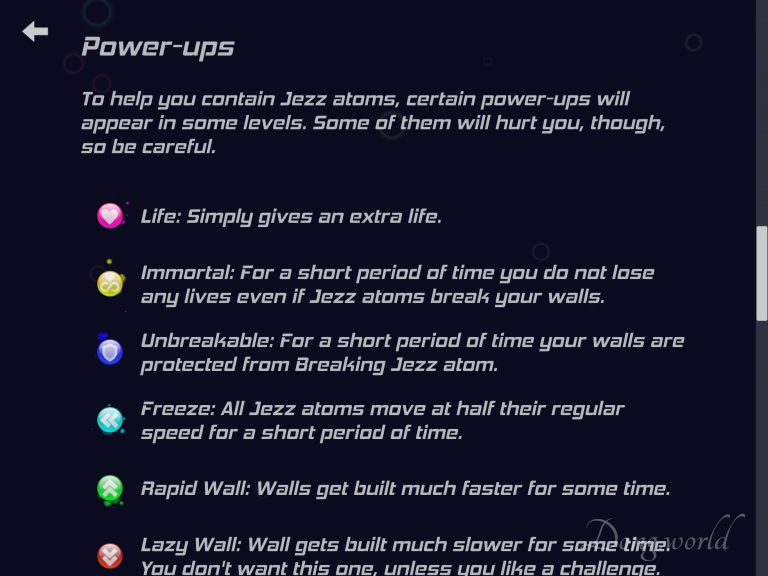 To help you contain Jezz atoms, certain power-ups will appear in some levels. Some of them will hurt you, though, so be careful. 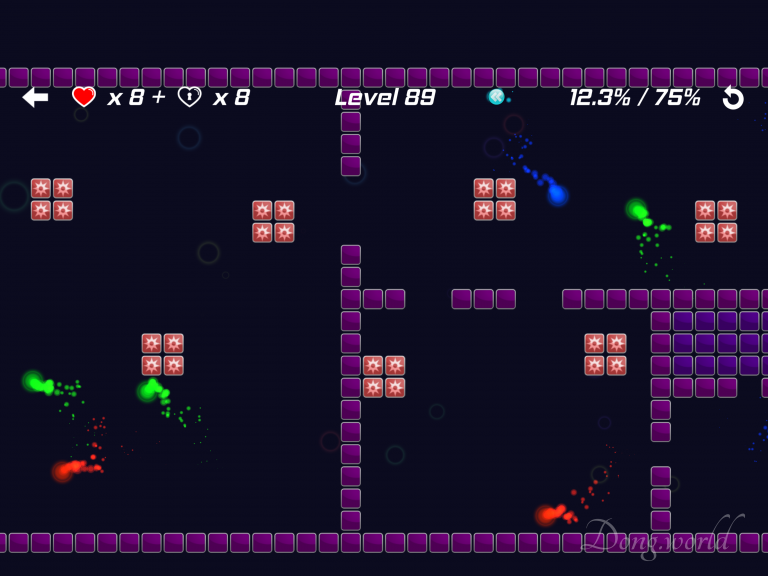 You start with a certain number of regular lives (displayed in the top left corner). Each wall consists of two segments (left and right, or top and bottom) and losing each segment costs one life.

In addition to regular lives, you may also have some extra-lives. If available, you can choose to watch an ad to unlock these to continue the level. 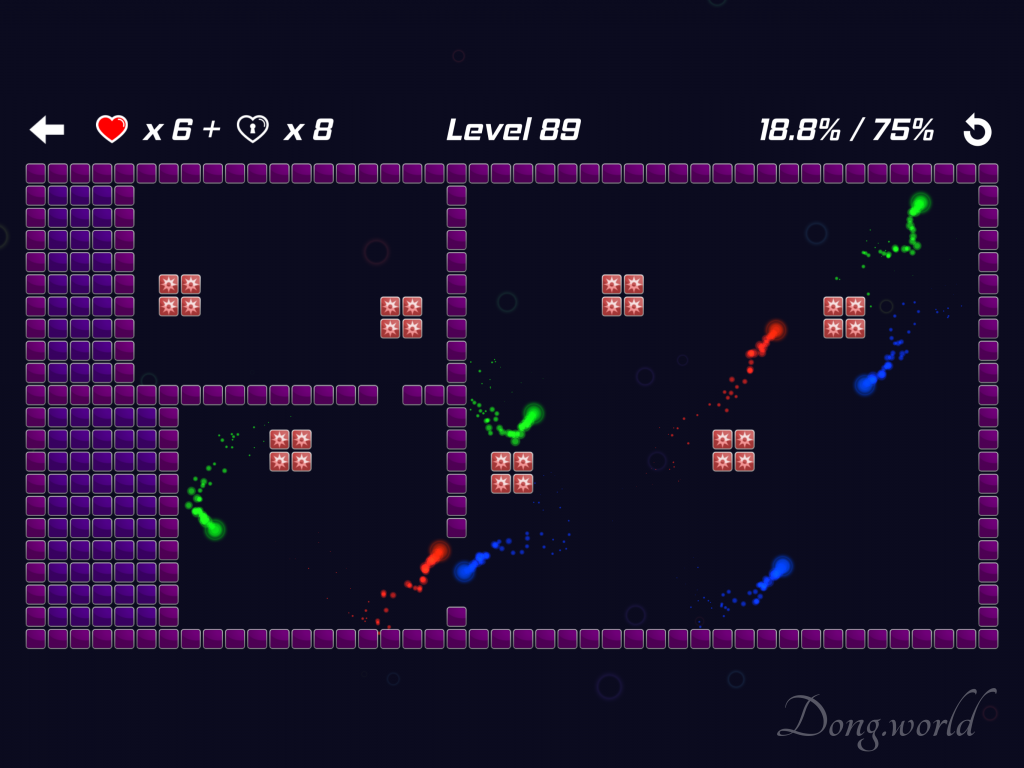 In some levels, you’ll see some pre-built walls. Those are there to help you.

In other levels, however, you’ll see some spike-walls. Those destroy your walls whenever you try to built on top of them. Hence you’ll have to find a way to built around them. 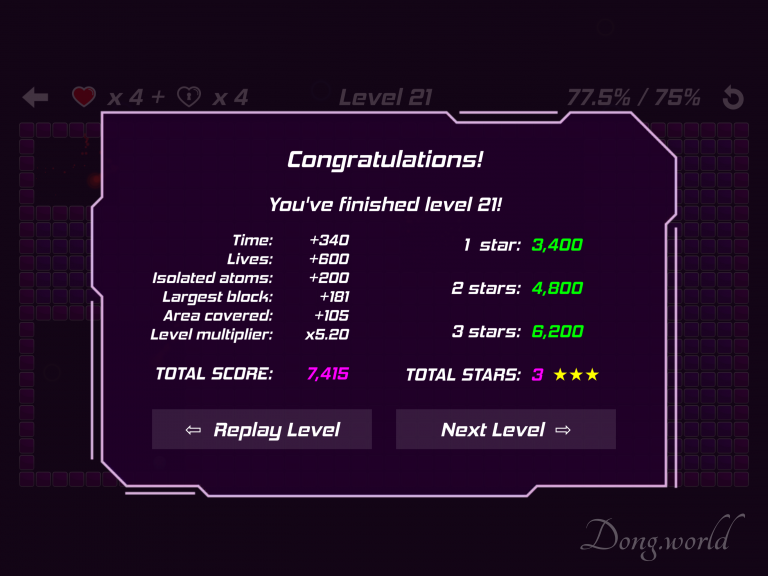 After each level, you’ll get a score based on several factors:

– Time: The faster you finish the level, the more points you get.
– Lives: Each remaining life gives 100 points.
– Isolated atoms: Each Jezz atom that’s captured in the area on its own gives 100 points.
– Largest area captured: Each block of wall in the largest captured area gives 1 point.
– Total area captured: Each block of wall above the required threashold gives 5 points.
– Level multiplier: Higher levels give more points.

Depending on the total score, you can get up to 3 stars for each level. If you didn’t manage to get 3 from the first try, you can always try again. 🙂

All in all, Jezz Mania is completely free and you only need to watch an ad if you want extra lives to continue in a certain level.

If you have any questions or suggestions, don’t hesitate to contact us at jezz@countrymania.net.