Haven’t heard about Morse Mania? Read my other post, and try the game out by downloading it from App Store or Google Play Store:

A new version of Morse Mania has just been released on Android, and is coming to iOS very soon. Morse Mania version 3.0 has a rather different main screen layout and is more powerful than the previous two versions. In order to meet the needs and requirements of various users, who contacted me either by email or through Google Play store review or App Store review, I added some new features (both free and premium) and made sure the app is easier to understand and use for both existing and new users.

The first thing that users will notice is a short tutorial explaining the meanings of the buttons on the main screen: 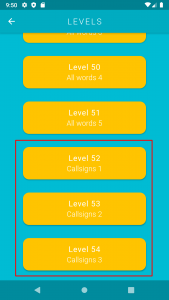 If you don’t know, callsigns are used to legally identify the station or operator, with some countries requiring the station callsign to always be used and others allowing the operator callsign instead.

Callsigns can be in various different formats, but the most popular one is 2×3 (pronounced “2 by 3”) that is comprised of 2 letters in a prefix, then a number, followed by 3 letters in a suffix, e.g. AB1CDE. Receiving a callsign is challenging, since you can’t rely on the context much, hence the sequence needs to be decoded precisely.

You can read more about the callsigns here or here. 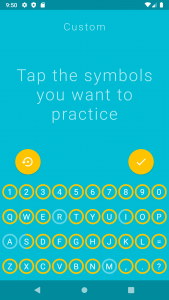 Yet another new feature is the ability to create custom levels. Instead of choosing from a large number of regular levels, users can now customize the level by choosing the symbols to practice themselves.

For example, if you’ve finished training a large part of the alphabet but are still struggling with several symbols, now you can concentrate on learning those particular symbols, instead of repeating the whole alphabet again. 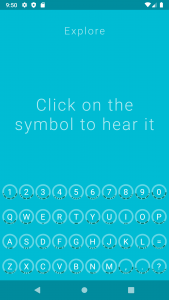 Another change that previous users might notice is the dedicated explore screen. Previously it was available as a bottom part of the main screen, but since I needed to make space for more buttons there, I moved it to its own screen.

Now it contains the instructions to make it more obvious how to use it: just click on the symbol to hear it. It also displays the Morse code pattern at the bottom of each letter, and a sound of it respects the settings of the app: speed (WPM) and frequency (Hz).

1) the game now supports hardware keyboards. Several people contacted me asking why they can’t use laptop keyboard when they’re running the game on Chrome OS (yes, turns out you can run Android apps on laptops these days), so I fixed this, should work fine in the new version.

2) added a setting for vibration on key-press. People asked for the device to provide some sort of feedback after the symbol was pressed. This is especially useful in the later levels with words, since it’s nice to get a confirmation that the touch actually registered with a device. One possible confirmation was to use sound, but I decided that it would be too distracting, so added a setting to enable short vibration. 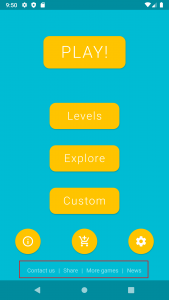 You will also notice that I’ve added several useful links at the bottom of the main screen to make it easier for users to contact me (App Store and Play Store reviews have a strict character limit, so I’d prefer users who have issues or questions to contact me by email directly), share the app (please do this, if you liked it :)), or read more about the app in this blog.

Android version also contains a link to other Mania games: Country Mania and Brick Mania. They are currently not supported on iOS but I have some plans on implementing Brick Mania in the coming months. 🙂

That’s it for version 3, I have many ideas for future features, so stay tuned and good luck learning Morse Code!