Hello everyone! Long time no see in my Food section. Since I started writing about food recipes, my friends are always asking me, you don’t cook Chinese food anymore? Well, actually. it’s kind of difficult to buy all the ingredients to cook an authentic Chinese dish, even in Asian or Chinese supermarkets. However, for some simple dishes, it’s still possible. Today I’m gonna show you how to cook one of my favorite dishes since I was a kid, Spicy and Sour Potato Shreds.

I know it’s kind of weird for westerners to have potatoes as a side dish with rice or noodles, because potatoes are cooked as main dishes in western world like rice or noodles in China. However, why not having a try and see whether you like it or not.

I call it spicy and sour potato shreds because I add chilis as well as rice vinegar. Here, I’d like to proudly present to you one of the most famous vinegar kinds in China, which is originated from and produced in my hometown, Zhenjiang. You can basically buy it in every Asian and Chinese supermarket abroad.

Zhenjiang vinegar (Chinese: 镇江香醋; pinyin: Zhènjiāng xiāngcù) (also known as “Zhenjiang aromatic vinegar” and formerly as “Chinkiang vinegar”) is a broadly used type of rice-based black vinegar originating from the city of Zhenjiang, JiangsuProvince, China. Its origin can be traced back at least 1400 years BP. Jiangsu Hengshun Vinegar Industry Company, established in 1840, is a notable producer at the present time. A legend of the vinegar’s origin can be tied to the Xia Dynasty (ca. 21st – 16th Century BCE) period. During that time, according to the legend, a fortuitous accident in Zhenjiang, Jiangsu Province, resulted in a winemaker’s creation of the vinegar.

Production of Zhenjian vinegar begins when a vinegar Pei mixture (wheat bran, rice hull, alcohol obtained from saccharification of glutinous rice and vinegar seed from a prior batch) is poured into an urn until the urn is half-full. The mixture is kept warm for up to 3 days in summer and 6 days in winter. At that point, rice hull is added and mixed in once per day until the urn is full. Salt is added and the urn is stored for up to 3 months during which it undergoes an aging process. The vinegar is then leached and the soaking liquid from water-soaked, parched rice is added as a colour and flavour enhancer. 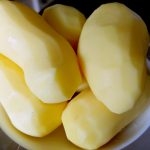 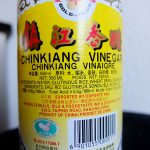 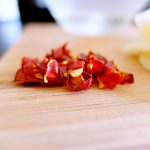 The most important thing in cooking potato shreds is to make the shreds. If you have a shredder which has appropriate holes, then it saves you a lot of time and effort because the size of the potato shreds determines the texture of the final dish. It’s better to be 1 mm wide, 1 mm high and the length of the potatoes, because if it’s too thick, then you need to cook them longer and they will become soft. If they are too think then again they become cooked too fast and get soft as well. The best texture should be that they are cooked but crunchy. 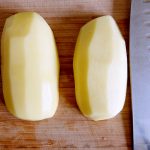 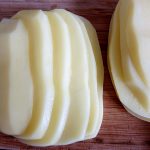 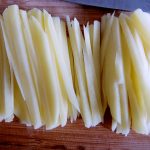 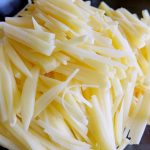 I suggest you buy baking potatoes as they are big and thus, easier to cut. You can cut the whole potato into two halves first and then slice them into 6-7 pieces (depending on how big the potato is). Put the slices together (bigger ones at the bottom) and cut them into small lines (shreds).

After cutting all the potatoes, put one table spoon of salt in and use your hands to grab them and mix them very well. Let them marinate for around 20 mins. 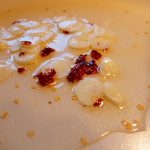 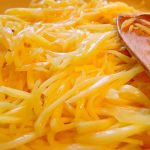 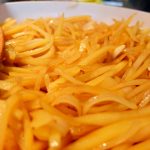 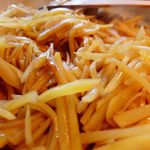 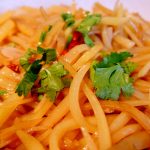 I always eat them with rice as they are quite appetizing, but if you wanna have them with bread etc, I think it should also be good.