Hello everyone! I published a post about cooking squid with green string beans, carrots and bell pepper before and in this post, the most important ingredient is still the squid but with Chinese leeks. Actually I cooked the one with Chinese leeks first but I was worried whether you’re gonna like it or not so I didn’t post it. Now I think you should have the option of whether you wanna try it or not. However, I have to warn you that the Chinese leeks have a quite strong smell and taste and even many Chinese people don’t like it. Chinese leeks are also called Garlic chives, Chinese chives. If you are interested you should probably go to a Chinese supermarket to smell it first and then decide to buy it or not. Again, smell it first! What’s more, I have to mention that the Chinese leeks they sell in the Asian supermarkets abroad are not the young ones as they are transported from afar. If they are like the young tender ones we eat in China, they are much better. However, they also go bad very quickly and that’s why you can rarely see the them abroad especially in the countries far from China. However, I do love Chinese leeks especially ad filling in the dumplings or pancakes. After spending so much time warning you I think let’s get started preparing this dish.

Preparation of the dish 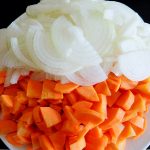 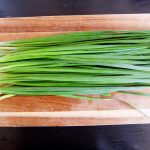 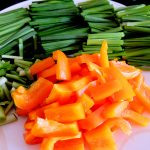 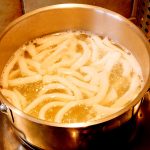 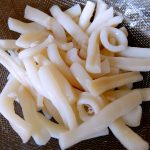 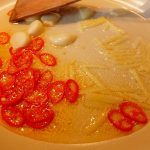 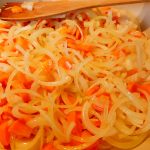 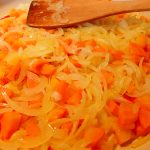 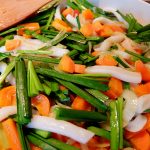 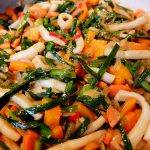 First of all, pour the sunflower in and when you feel the oil is hot enough, put the chili pepper, ginger and garlic in.

Before the ginger or garlic turn brown, put in the carrots and onions and fry them till they turn soft.

When you see that the onions and carrots turn golden yellow, put in the Chinese leeks and pre-boiled or pre-cooked squid. Add in the cooking wine at this moment and salt (if you want to add soy sauce you should add it now but then remember to add less salt)

Fry all the ingredients for around 5 mins till the Chinese leeks get soft and the sauce gets a little bit thick.

Remember to leave some sauce by the end so you can pour the dish together with some sauce on rice.