Greek Alphabet Academy is developed to help those who are interested in the Ancient Greek Alphabet, mathematics and physics and want to memorize quickly and easily the upper- and lowercase of the Greek letters and their English pronunciation. The two key teaching and training concepts are progressive introduction and focused repetition. The 24 letters are broken down into manageable units (levels) to ensure efficient learning and training. If you are not particularly interested in the alphabet but in improving your memory in general, Greek Alphabet Academy is also a useful tool.

Major features
What’s Ancient Greek Alphabet?
What are the learning modes?
Levels and challenges
What settings can I change?
Tips and suggestions for the speaking mode

The Ancient Greek Alphabet differs from the Modern Greek Alphabet in the pronunciation of some of the letters. This app teaches the Ancient Greek Alphabet, which is used in mathematics, physics, astronomy and other sciences instead of in the modern Greek language. For example, the lowercase epsilon (ε) is used for an arbitrarily small positive number, lowercase pi (π) for the ratio of the circumference of a circle to its diameter, capital sigma (Σ) for summation, and lowercase sigma (σ) for standard deviation.

The Explore page allows users to see all the letters of the Greek alphabet (upper- and lowercase) and click on them to see their English names and listen to their pronunciation.

What are the learning modes?

In the Reading mode, you can learn the letters from Greek to English or from English to Greek. At the beginning of each level, four letters are introduced one by one and you should try your best to remember them. After going through 4 learning cards, you will start a quiz game, which trains and enhances your knowledge. Along the way, you can always listen to the English pronunciation of the letters. 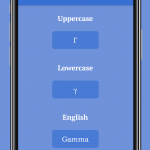 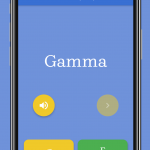 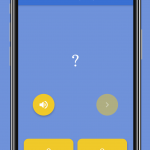 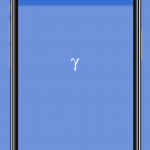 In short, a level focuses on introducing and training new letters while a challenge tests what you’ve learnt. In a level, first a few new letters will be introduced and you should try to remember their Greek letters, English names or pronunciation (depending on the mode). Then you’ll start a quiz game to train your knowledge. In a challenge, you must make less than 3 mistakes to pass it.

What settings can I change?

Under Settings in Greek Alphabet Academy, you can change the font of the Greek letters and their English names as well as the button text. You can also enable/disable the button sound, correct/wrong sound (when you answer a question correctly or wrong), button vibration and vibration on error.

Tips and suggestions for the speaking mode

Due to the rules imposed by Google and Apple, voice recognition (speaking mode) works different on Android and iOS devices.

On iOS devices, you must press the microphone button to start the recording and press it again to stop the recording. The start and stop are not marked by any sound. There’s also no correct or wrong sound in the speaking mode on iOS devices. A correct answer is marked by “Correct!” on the screen and a wrong answer is marked by “Try again…” on the screen and vibration (if vibration on error is switched on in Settings). On iOS devices, the speaking mode works offline.

Last but not least, I have a few tips for practicing speaking smoothly. First of all, do not start speaking immediately after the microphone is switched on. Wait half a second to make sure the whole word is recorded. Secondly, speak loudly and clearly. Thirdly, try to practice in a relatively quiet environment. In this way, you’re guaranteed to effectively train speaking.

What are you waiting for? Simply download Braille Academy and try it out!

Greek Alphabet Academy – Master the Greek letters with ease and fun! was last modified: May 7th, 2021 by Dong