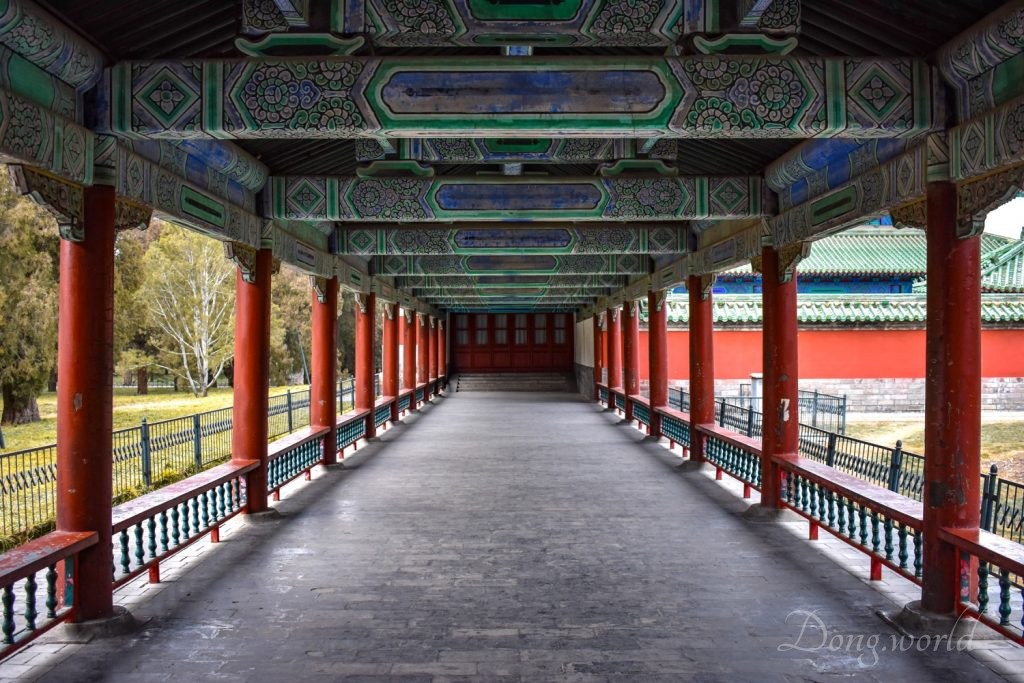 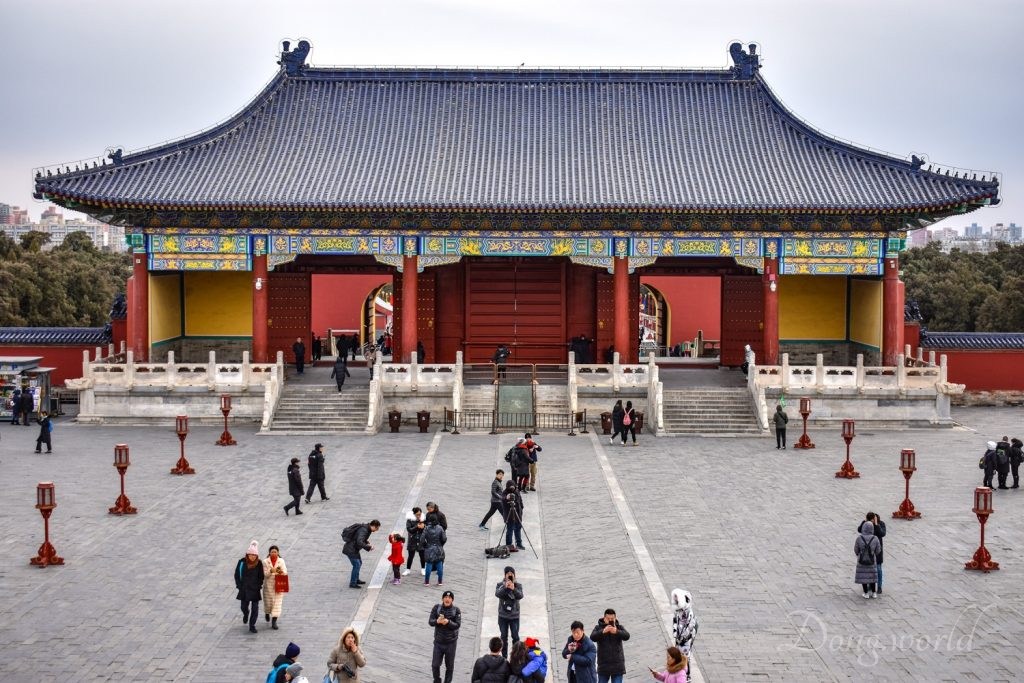 First of all, let’s see what the UNESCO says about the Temple of Heaven. The Temple of Heaven is located in a park with the same name, which has four gates (East Gate, South Gate, West Gate and North Gate). It can be easily reached by bus or metro through any of the gates.

In general it’s very convenient to reach the site and I took Metro Line 5 and both entered and exited through the East Gate.

Please note, the Temple of Heaven is not one temple but a complex of fine cult buildings. The major attractions include the Hall of Prayer for Good Harvests, the Echo Wall, the Circular Mound Altar, the Divine Music Administration Hall, the North Divine Kitchen, the North Animal-sacrifice Pavilion, and the Fasting Palace. Depending on the season (high season: 1st April – 31st October, low season: 1st November – 31st March), the prices of various types of tickets vary.

The Temple of Heaven Park is not huge so I recommend spending half day here, which should be enough for visiting all the attractions. I arrived rather late in the afternoon so I only spent two hours visiting the Hall of Prayer for Good Harvests, the Echo Wall, the Circular Mound Altar, etc. 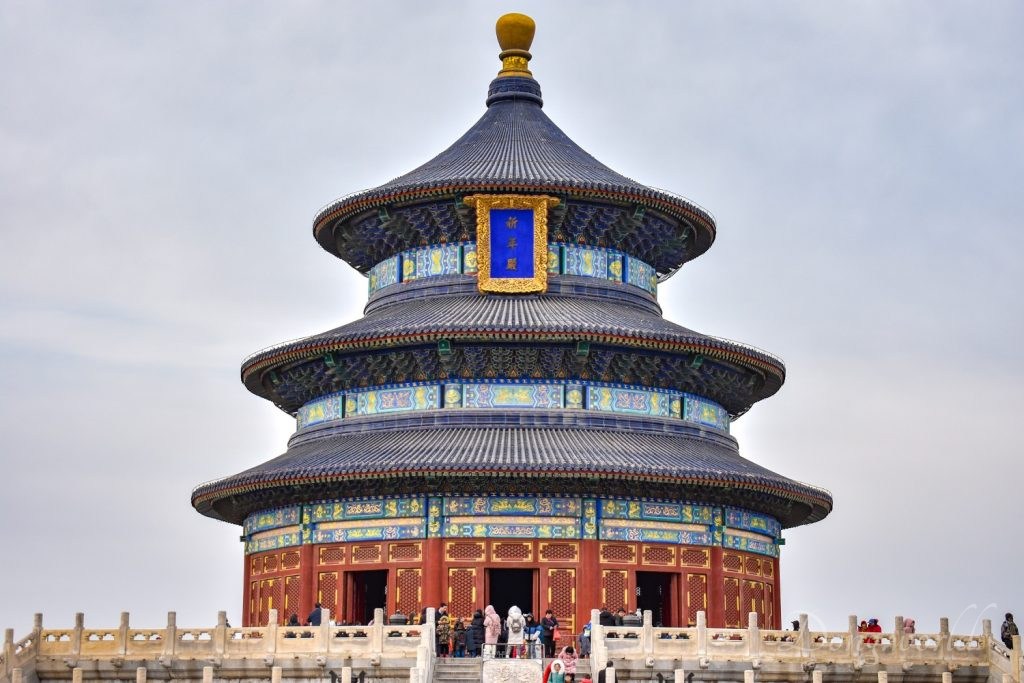 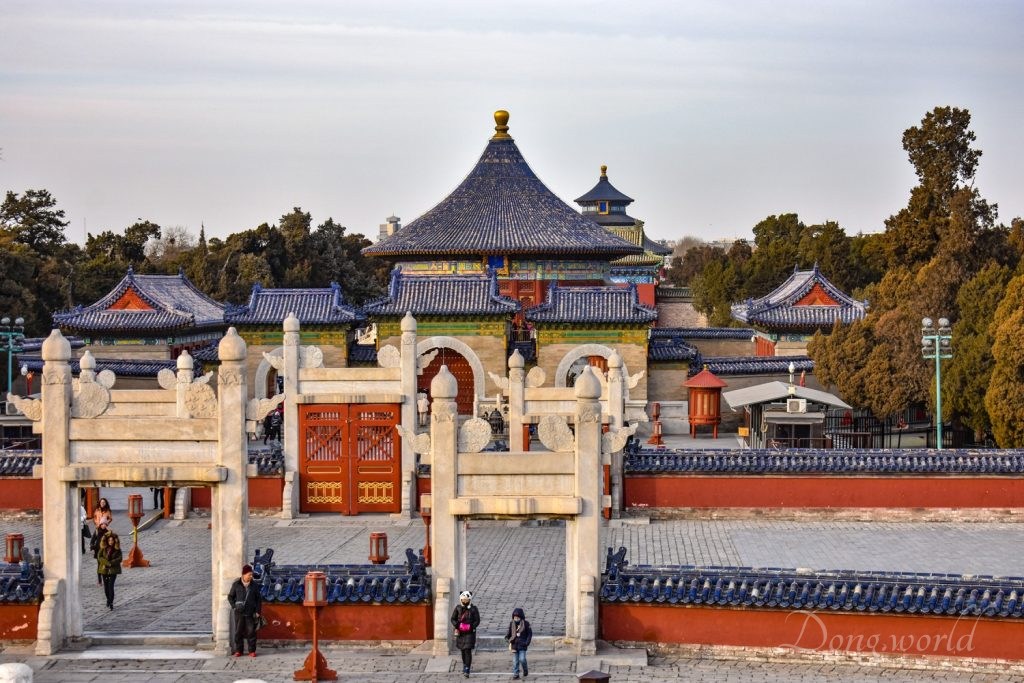 The Temple of Heaven used to be a place where the emperors of the Ming and Qing dynasties, who played a vital role in the conversation between humankind and the celestial realm, worshipped heaven and offered sacrifices to pray for bumper harvests and favourable rain. Located south of the Forbidden City, the original Altar of Heaven and Earth was completed together with the Forbidden City in 1420. In the 9th year of the reign of Emperor Jiajing (1530) the decision was taken to offer separate sacrifices to heaven and earth, and therefore the Circular Mound Altar was built to the south of the main hall for sacrifices particularly to heaven. The Altar of Heaven and Earth was thereby renamed the Temple of Heaven in 1534. In compliance with the layout set in Jiajing’s reign in the Ming dynasty, most of the structures we see today were constructed under the reign of the emperors Qianlong and Guangxu in the Qing dynasty.

Surrounded by double walls (semi-circle in the north and square in the south), the Temple of Heaven is divided into an inner part and an outer part containing a total of 92 ancient buildings with 600 rooms and covering an entire area of 273 hectares. In the inner part stand ancient architectural complexes including the Hall of Prayer for Good Harvests, the Circular Mound Altar, the Imperial Vault of Heaven, and the Fasting Palace which served as a residence for the emperors during the period of fasting before the rituals, as well as the Red Stairway Bridge, the Long Corridor, the Seven Meteorites (Seven-star Stones), the Nine-dragon Cypress etc. In the outer part lie the Divine Music Administration Hall which was used for rehearsal of ritual music for ceremonies during the Ming and Qing dynasties, and the building which served as stables for sacrificial animals.

Connected by a raised sacred way, the most important structures are arranged in a line with the Circular Mound Altar to the south (with the conically roofed Imperial Vault of Heaven immediately to its north) and the circular, three-tiered, conically roofed Hall of Prayer for Good Harvests to the north. I’ll introduce them in detail in the next sections.

3.2 Hall of Prayer for Good Harvests Built in 1420 (the 18th year of the Ming-dynasty Emperor Yongle’s reign), the original hall, rectangular in shape, was named the Great Hall for Sacrificial Rituals and was used to worship both earth and heaven. Rebuilt in 1545 (the 24th year of the Ming-dynasty Emperor Jiajing’s reign) into a three-tiered, conically roofed hall covered with blue, yellow and green glazed tiles respectively, which symbolize heaven, earth and the mortal world, it was renamed the Great Hall for Offering Sacrifices. Reconstructed in 1751 (the 16th year of the Qing-dynasty Emperor Qianlong’s reign), it was surmounted by a three-tiered roof with azure glazed tiles only, and was designated the Hall of Prayer for Good Harvests, which was used exclusively for praying for good harvests in the spring.

38.2 meters in height and 24.2 meters in diameter, the hall is supported by immense pillars. Divided by the pillars, the inner spaces symbolize the four seasons, the 12 months of the year, the traditional Chinese 12 time divisions of the day and night, and the constellations. It is the only existing example of the ancient architectural style of Mingtang, the grandest sacred temple. Both the West and East Annex Hall were constructed in 1420, and each of them was originally composed of two rows of halls, with the front one with a width of 9 rooms and the rear one with a width of 7 rooms. In 1751 (the 16th year’s reign of the Qing Emperor Qianlong), Emperor Qianlong had the rear halls removed due to “their disorderly arrangement”. The remaining halls were used to house and worship the divine tablets of attendant gods.

Today, one of the halls houses the Exhibition of the Rite of Worshipping Heaven, which enables visitors to have a better understanding of the history and culture of the rite of worshipping heaven in ancient China, while the other one houses the Exhibition of the Hall of Prayer for Good Harvests, in which models and pictures give visitors deep insights into the largest round wooden ancient building that exists in China. Constructed in 1530 (the 9th year of the Ming-dynasty Emperor Jiajing’s reign), the altar served as the place for holding the ceremony of worshipping heaven on the winter solstice every year, hence popularly known as the Heaven-worshipping Terrace. It was first covered with deep blue glazed slabs, which were changed into light green stone slabs surrounded by white marble balustrades when the altar was enlarged in 1749 (the 14th year of the Qing-dynasty Emperor Qianlong’s reign). The amount of the steps of each leading flight, the slabs of each tier and the plates of each balustrade is either 9 or a multiple of 9, symbolyzing the 9 layers of heaven and its supreme importance. The surface of the uppermost terrace of the Circular Mound Altar is paved with nine concentric rings of stone slabs, which symbolize the nine layers of heaven. The round stone slab in the centre is called the Heavenly Centre Stone, which is surrounded by 9 stones in the first ring, 18 in the second, and up to 81 in the ninth. It is said that if one speaks standing on this stone, his/her voice will be particularly resonant and sonorous. During my visit, it seemed that the stone had some magical power as everyone was trying to stand on it for a second or two. It took me about ten minutes to take the picture above with no feet on it. 😛 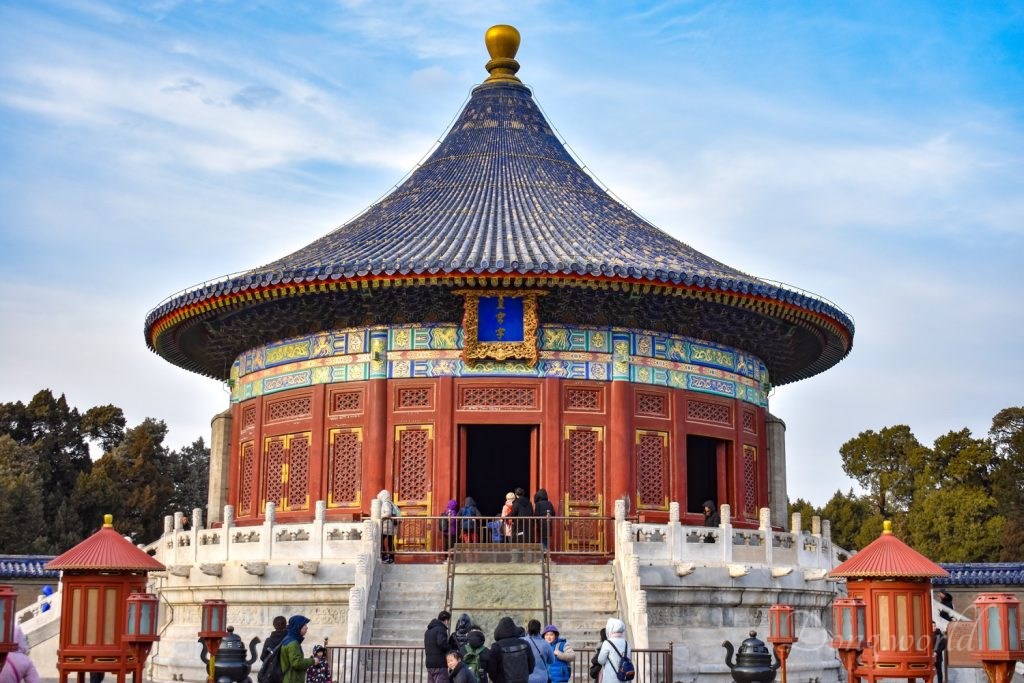 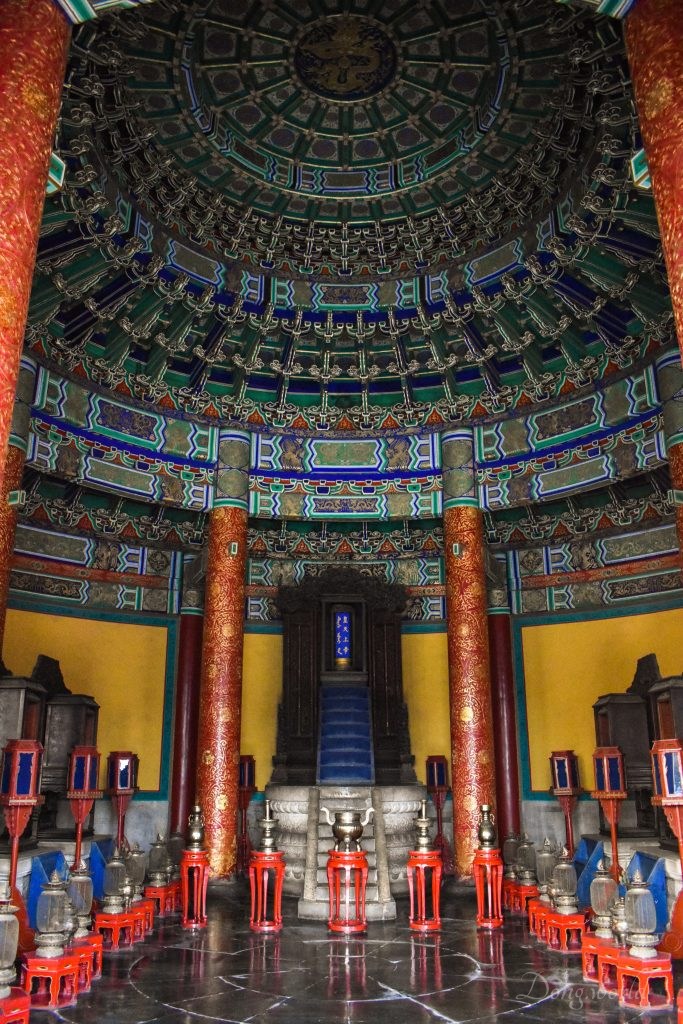 Built in 1530 (the 9th year of the Ming Emperor Jiajing’s reign) with a double-eaved roof and named the Hall for Appeasing Gods, the first structure standing on the site was the main hall of the Celestial Treasure House of the Circular Mound Altar, which housed the Gods’ tablets to be used at the ceremony of worshipping heaven. It was renamed the Imperial Vault of Heaven in 1538 (the 17th year of Emperor Jiajing’s reign) and rebuilt into the present form in 1752 (the 17th year of the Qing-dynasty Emperor Qianlong’s reign). 19.5 meters in height and 15.6 meters in diameter, this majestic and yet elegant hall is a fine wooden structure with a blue tile roof crowned by a gilded finial. Inside, there is a coffered ceiling featuring a gilded coiling dragon playing with a pearl in the centre (which you can see in the 2nd picture above).

West and East Annex Hall and the Echo Wall The complex including the Imperial Vault of Heaven and the East and West Annex Hall is surrounded by the Echo Wall, which constitutes an excellent body for sound waves to travel along the wall surface by continuous reflections. If two people stand by the wall behind the East Annex Hall and the West Annex Hall respectively and speak with their face towards north, they can hear each other clearly. During the Ming Emperor Jiajing’s reign, seven gigantic stones were placed to the southeast of the Great Hall for Offering Sacrifices (today’s Hall of Prayer for Good Harvests). Symbolizing the seven peaks of the Mount Tai, these are stones with engraved motifs of mountains. After the Manchus came to the throne in central China, in order to show that Manchuria is part of the Chinese nations (a nation refers to a group of people who share the same culture but do not have sovereignty), Emperor Qianlong issued an edict for another stone to be placed in the direction of northeast, meaning the Chinese nations are a big family and the country is unified.

Sadly, due to time limit I couldn’t make it to the Divine Music Administration Hall, the North Divine Kitchen, the North Animal-sacrifice Pavilion, or the Fasting Palace. I guess I’ll leave them for my next visit. If you have any questions about visiting the Temple of Heaven please don’t hesitate to contact me.

Temple of Heaven – an Imperial Sacrificial Altar in Beijing was last modified: February 7th, 2021 by Dong