3. The Church and Convent of Santa Maria delle Grazie 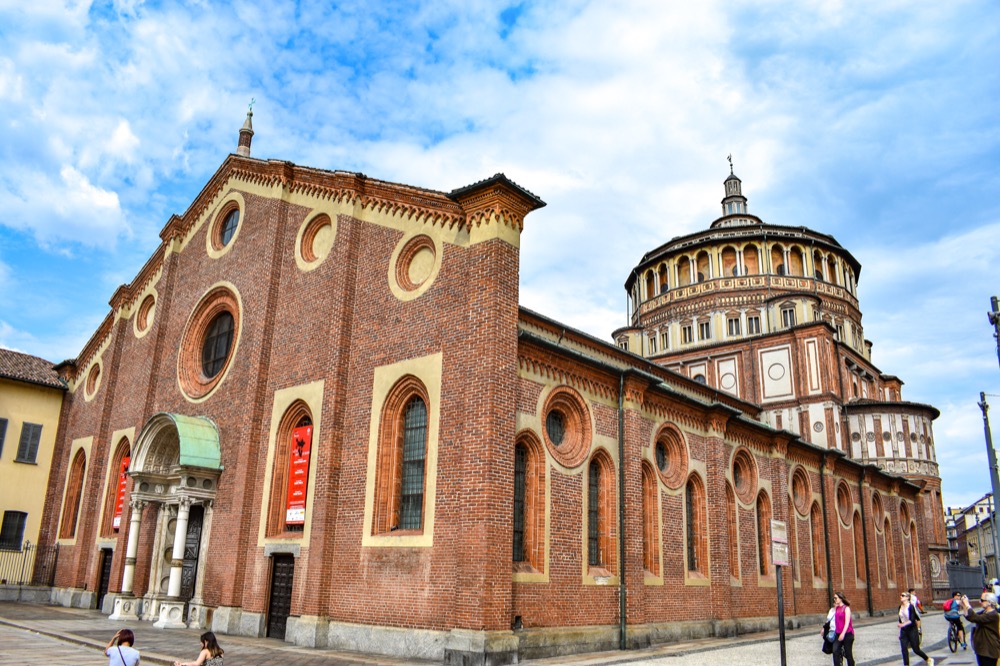 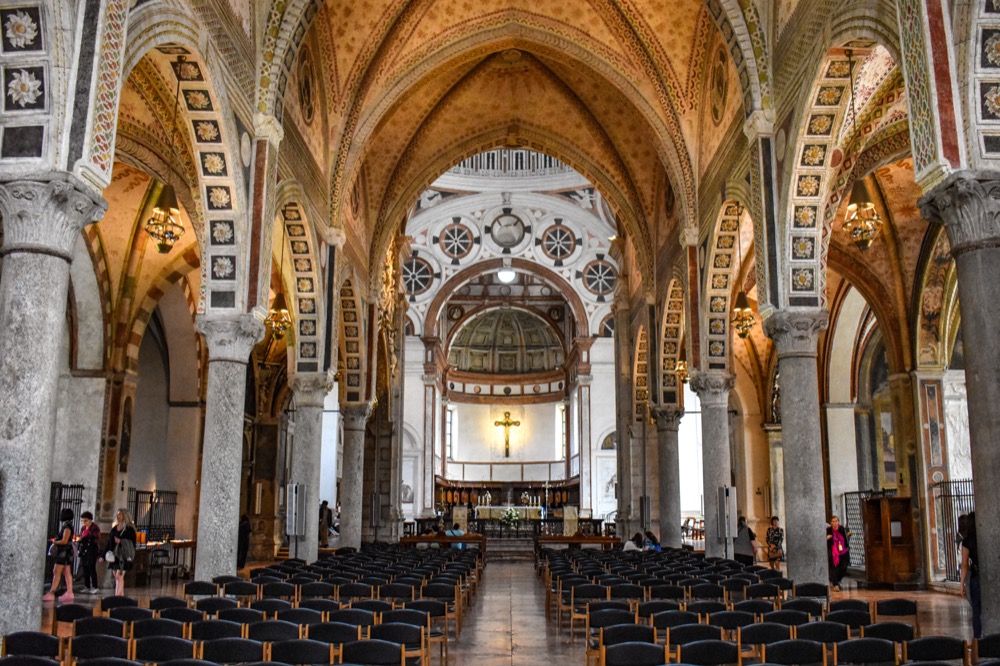 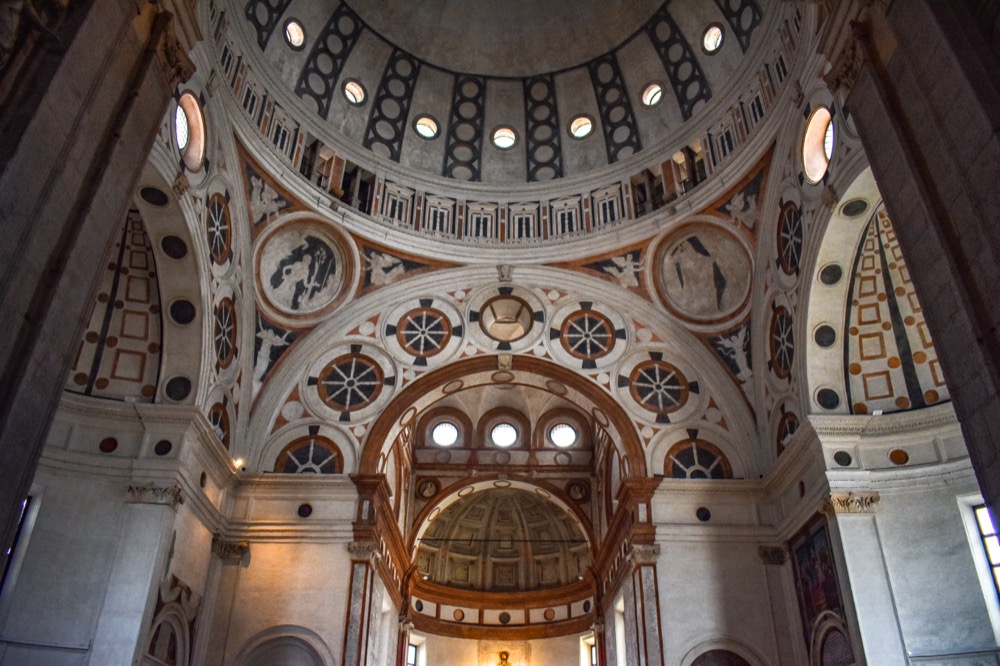 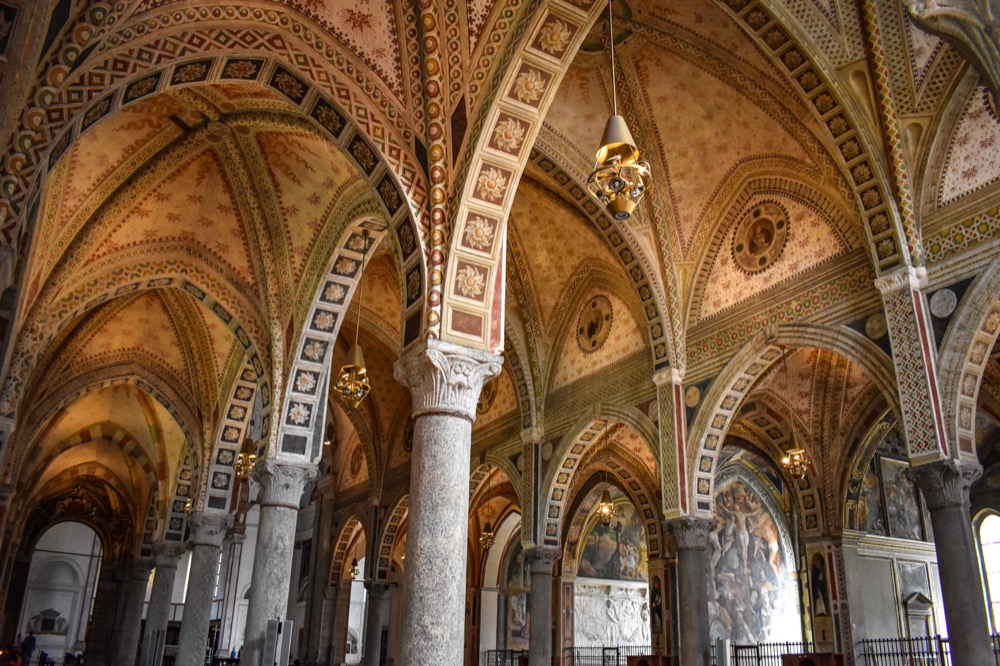 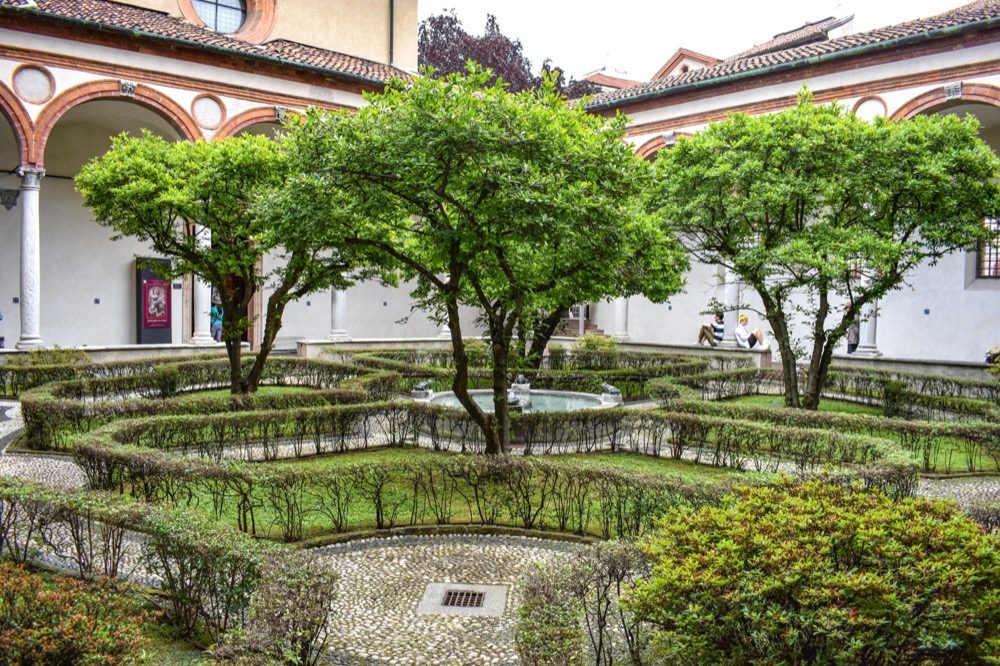 For visiting the basilica and cloister:

How to get there

For visiting The Last Supper:

I guess you’ve heard about how difficult it is to see The Last Supper as much as the mural painting itself. Actually I can confirm the rumour is true. For preservations reasons, viewing of the masterpiece is very limited. If you visit Milan very often or don’t really care about seeing The Last Supper, you can try your luck by asking the ticket office directly (most likely you won’t get the ticket). Nevertheless, if you really wanna see it and you don’t go to Milan frequently, reserve your ticket online or book it by phone at least 1.5 – 2 months in advance. Only in this way will you have a guarantee. I was really lucky to see it during my third visit to Milan and dedicated a whole post to the painting as well as some practical information such as how to book the ticket and what the opening hours are. If you are interested, please click here to read the post. What I can assure you is that all the fuss of booking it online or through the phone and all the trouble of traveling to Milan will be worth it the moment you see this legendary painting by Leonardo da Vinci.

Good news! From 16th May, the day of the extraordinary reopening to the public of the Sala delle Asse at the Sforza Castle, until 12th January 2020, the closing day of the “Milan and Leonardo 500” event, visitors will be able to follow Leonardo’s footsteps through the city with just one ticket, available at a very special price. The ticket will be valid for 30 days from the date of the visit at the Last Supper Museum, and within the 30 days, the ticket holder will be able to visit all the museums involved: the Last Supper Museum, the Castello Sforzesco Museums and Sala delle Asse, the Pinacoteca di Brera, the Pinacoteca Ambrosiana and the National Museum of Science and Technology Leonardo da Vinci. The “5x Leonardo” ticket must be stamped at the ticket office of each museum to collect an individual entrance ticket.

Please note, purchasing of the “5xLeonardo” ticket is subject to the booking of a viewing of the Last Supper. The ticket will be available for purchase from 18th April 2019 through the call centre (+39 02 92800360) and from 16th May also directly at the Cenacolo Vinciano ticket office (ticket office of the Last Supper Museum), only for the same day.

This year, thanks to the “Milan and Leonardo 500” event, extra viewing is allowed for holders of the “5xLeonardo” ticket. However, the amount of the ticket is still very limited and if you don’t wanna miss the opportunity, I recommend you to visit the ticket office early in the morning when it just opens. For me, I arrived at the ticket office at noon and there were only a couple of tickets left. It’s almost impossible to buy a normal ticket (instead of the “5xLeonardo” ticket) on site for a viewing of the same day unless you’re very lucky.

3. The Church and Convent of Santa Maria delle Grazie 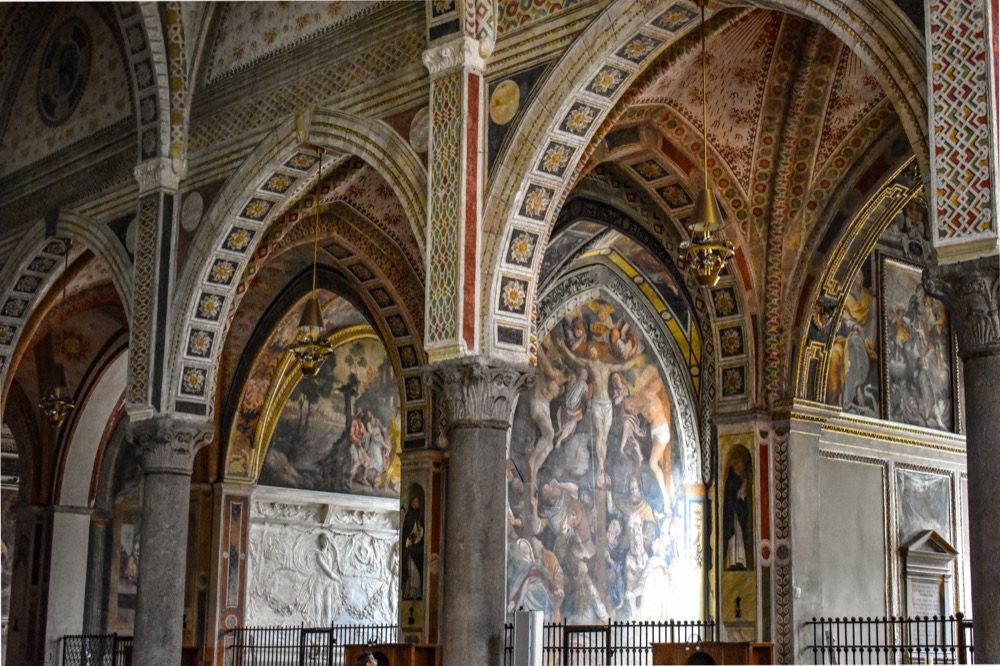 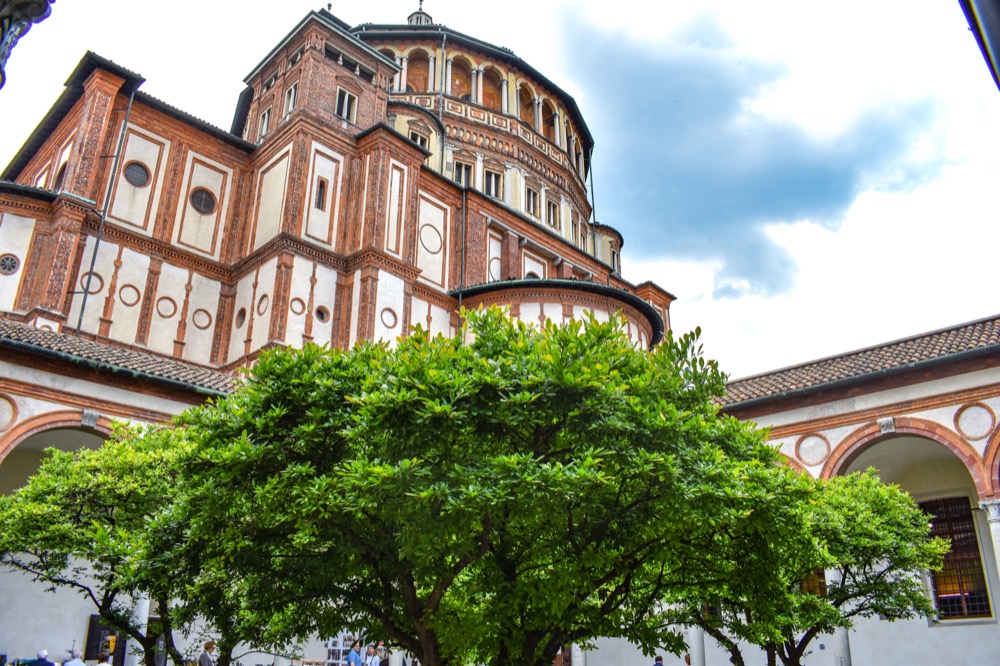 The Duke of Milan Francesco I Sforza ordered construction of a Dominican convent and a church at the site of a prior chapel dedicated to the St. Mary of the Graces. The main architect, Guiniforte Solari, designed the convent, which was completed by 1469. Construction of the church took decades. Duke Ludovico Sforza decided to have the church serve as the Sforza family burial site, and rebuilt the cloister, the apses and the dome, all completed after 1490. Ludovico’s wife Beatrice was buried in the church in 1497.

The design of the tribune (the crossing, dome as well as the transept apses and the coir with apse) has been attributed to Donato Bramante, who at the time was in the service of the Duchy. In 1543, the Titian altarpiece depicting Christ receiving the crown of thorns was installed in the Chapel of the Holy Crown. The painting, looted by French troops in 1797, is now in the Louvre. This chapel is frescoed with episodes from the Passion of Christ by Gaudenzio Ferrari. During World War II, an allied aerial bombardment hit the church and the convent. Much of the refectory was destroyed, but some walls survived, including the one that holds The Last Supper, which had been sandbagged to protect it. Some preservation works are done to maintain it for the future. It is believed that the current and future preservation works will keep the painting safe for many centuries to come.

Nowadays the Old Sacristy, designed and constructed by Donato Bramante, is the seat of a Dominican Cultural Centre, in which the brethren organize and host conferences on various themes pertaining to spirituality, philosophy, art, literature and sociology, in addition to musical concerts and artistic exhibitions. It can be accessed from the cloister.

Maybe you can arrive one hour before your selected time slot of viewing The Last Supper and spend some time exploring the church and the cloister. Instead of solely admiring the painting, visiting the whole complex will complete your experience. According to the will of the Duke of Milan, Ludovico Sforza, the tribune of Guiniforte Solari’s church was demolished to give place to the Renaissance tribune planned by Bramante. On 29th March, 1492 the foundation stone was laid. The width of the central and side naves of Solari’s Gothic church (17,20 m) is taken as the side of the tribune’s cube and also as diameter of the hemispherical dome. The sober decorative scheme is formed by architectural brickwork structures and by mural paintings. A remarkable example are the four outstanding Fathers of the Church in Western Christianity–Jerome the penitent, Ambrose with a whip, Gregory with a tiara, and Augustine with an angel appearing as a child–represented in large round frames, each supported by three angels. In the dome, a garland of Dominican saints, cherubs, emblems and various motifs runs below and above sixteen round openings. As a whole it reflects the divine light of heaven. 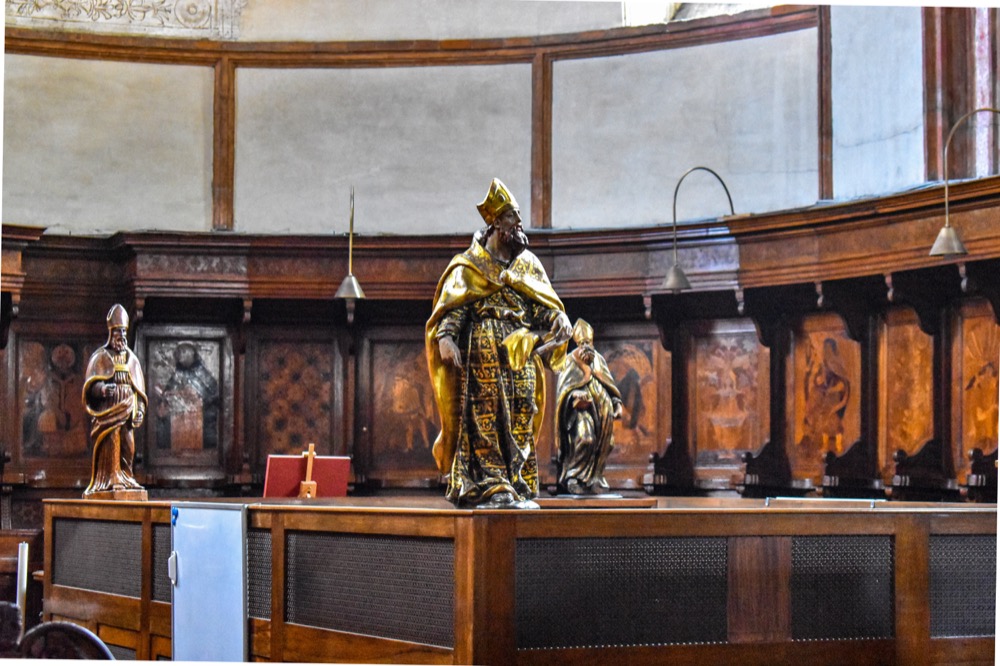 The choir is decorated with the original mural paintings discovered in 1935. On the left wall, we see St. Dominic and St. John the Baptist and to the right of the wondow, St. Peter Martyr; on the right wall we see St. Thomas Aquinas and St. Paul, and to the left of the window, St. Vincent Ferrer. On the wings of the arches that support the umbrella-shaped ceiling, we see eight medallions with the four Fathers of the Church paired with the four Evangelists. They are commonly attributed to Giovanni Antonio Amadeo. The crucifix at the end of the apse comes from the high altar which was dismantled in 1935. The wooden choir stalls of the friars for the holy liturgy is at two levels: the lower level (1470 – 1475) has 33 seats inlaid in Carthusian style; the upper level (1510), consisting of 42 seats showing floral decorations, angels and saints, is inlaid in Lombard style. The modern organ is “sunken” in the middle of the floor.

3.3 The Chapel of St. Peter Martyr In this chapel, we see a faithful copy of Titian’s masterpiece Martyrdom of St. Peter of Verona, which was destroyed in 1867 by a fire in the Chapel of Our Lady of the Rosary in Venice where it was deposited for restoration.

A vivid ekphrasis by Pietro Aretino describes how “you would comprehend all the living terrors of death” in the face and flesh of the man on the ground, and perceive “the pallor of vileness and the whiteness of fear” while contemplating his companion in flight. Aretino’s description also tells us how realistic and shocking the image must have seemed to contemporaries. Such violence had never been seen in an altarpiece before, nor had any saint been portrayed in such a humiliating position, but Titian’s solution is controversially Venetian in the importance of the landscape, whose trees soar and stir in sympathy with the drama below.

3.4 Chapel of the Holy Crown In 1543, the Titian altarpiece depicting Christ receiving the crown of thorns was installed in the chapel. In 1797, it was looted by French troops and is now kept in the Louvre. The frescoes of the vaults and walls were painted by Gaudenzio Ferrari with scenes from the Passion of Christ. The current altarpiece is by Caravaggino depicting the deposition of Christ. 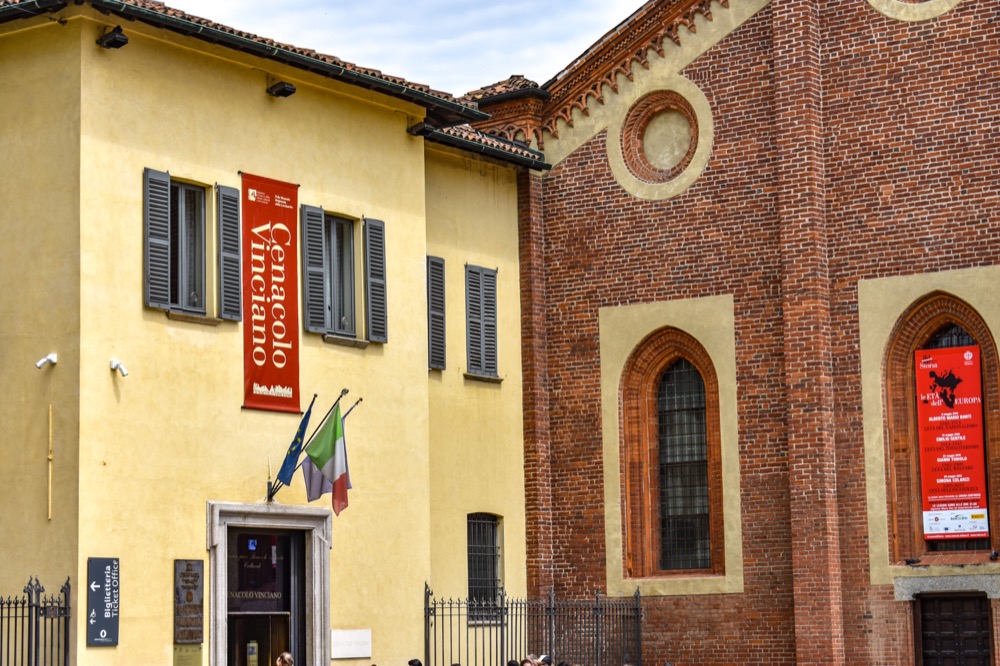 As I mentioned above, after seeing The Last Supper, I dedicated a four-thousand-word post to it which not only introduces the painting in detail but also provides some practical information such as how to ensure a successful viewing. In the painting, do you know who’s the apostle that betrayed Jesus and what evidence can you find? Why is the Holy Grail not on the table? Is there really an extra hand in the painting which belongs to none of the figures present? What does the food on the table symbolize? How did da Vinci achieve this one-point perspective? Was Judas really portrayed after the director of the convent or a criminal as people say? Why is John (to the left of Jesus) portrayed with feminine features? Is he actually Mary Magdalene? Is Jude actually the self-portrait of da Vinci himself? There are many mysteries and secrets shrouding The Last Supper, and now please click here to travel back in time and see what happened the moment Jesus said, “Truly I tell you, one of you will betray me.”