In my previous post I talked about the Royal Palace (including the Royal Armoury), the Holy Shroud Chapel and the Royal Library of the Royal  Museums of Turin. In this post, I’ll introduce to you the rest of the complex, that is to say, the Royal Gardens, the Sabauda Gallery, and the Archaeological Museum.

2.1 The Holy Family by Anthony van Dyck
2.2 The Annunciation by Orazio Gentileschi
2.3 The Three Eldest Children of King Charles I of England by Anthony van Dyck
2.4 Equestrian Portrait of Thomas Francis, Prince of Carignano by Anthony van Dyck
2.5 St. John the Baptist by Guido Reni
2.6 Still Life with Flowers by Abraham Mignon
2.7 Hunting Scene near London (formerly The Fall) by Jan Griffier I
2.8 Madonna with Child with the Infant St. John, St. Catherine of Alexandria and Other Saints by Andrea Mantegna and his workshop
2.9 The Passion of Christ by Hans Memling
2.10 Christ in the House of Simon of Pharisee by Paolo Veronese
2.11 The Trinity by Tintoretto
2.12 The Queen of Sheba Offering Gifts to Solomon by Paolo Veronese and his workshop 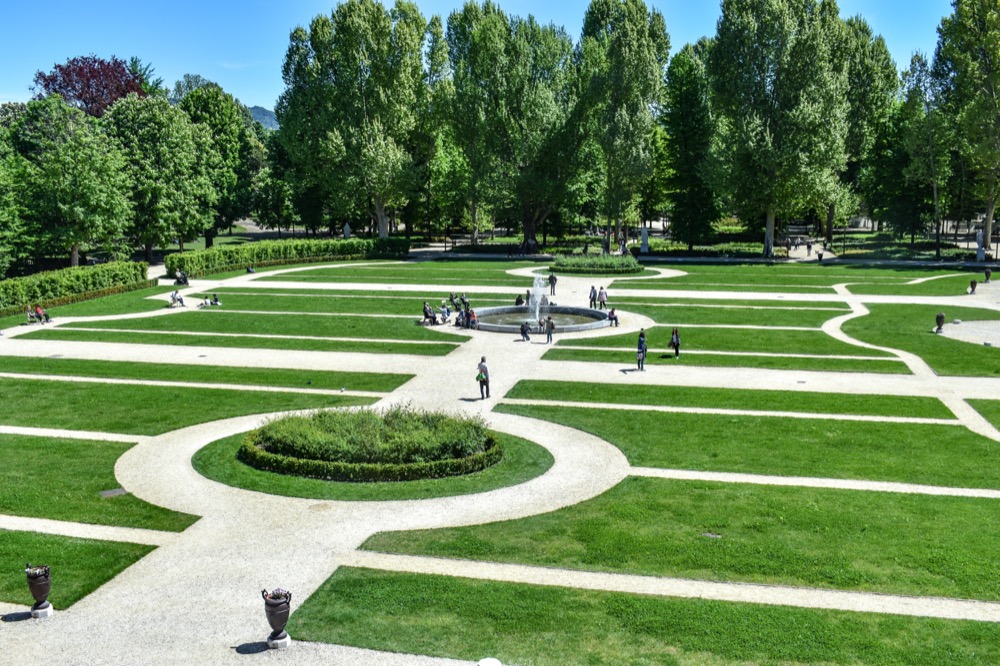 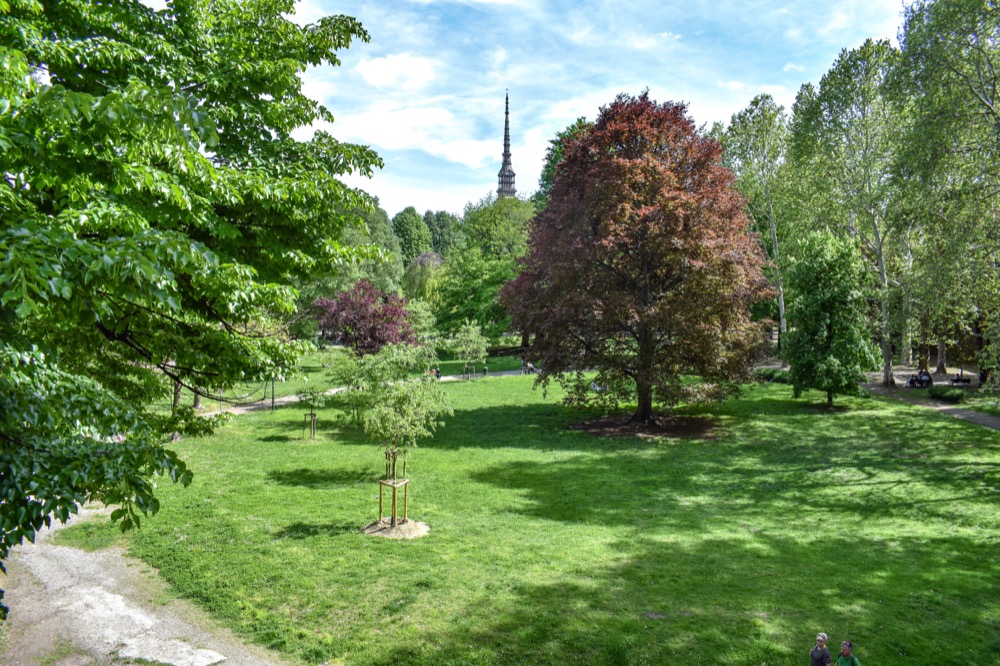 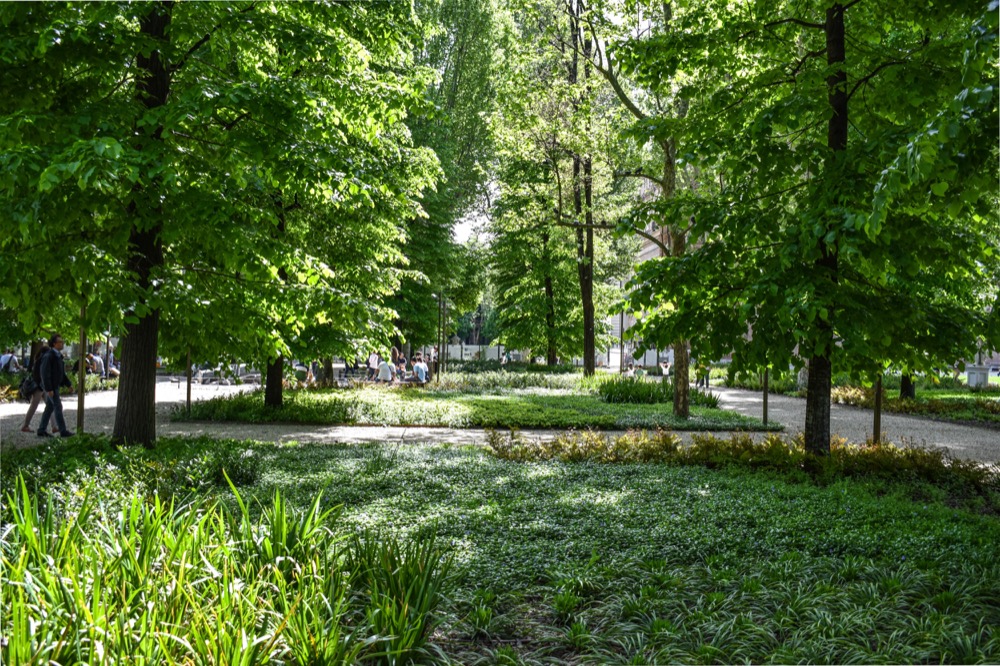 Please note, the Royal Gardens are open to the public free of charge from Tuesday to Sunday between 8:30 and 19:00. They are closed on Mondays.

The gardens currently extend over an area of about five hectares and include the Ducal Garden to the north of the Royal Palace, the oldest one, the Boschetto, and the gardens to the east which were created during the eastward expansion of the city in the 17th century. The initial layout dates from the rule of Emmanuel Philibert of Savoy (1553 – 1580), with fountains, grottoes, fish ponds, cages for exotic animals, and potted orange and lemon trees. In 1673, the new layout of fortifications opened up more space but a definitive new design of the gardens only came into being in 1697, which was conceived by the French landscape architect André Le Nôtre, the principal gardener of King Louis XIV of France who also designed the Gardens of the Palace of Versailles. The miroir d’eau (water mirror) in the eastern area was adorned between 1755 and 1758 by a group of Triton and Nereids, made by the sculptor Simone Martinez. The last major intervention was carried out between 1886 and 1892 by Marcellino Roda, who rearranged the area around the Bastion Verde and redesigned the parterre to the north. 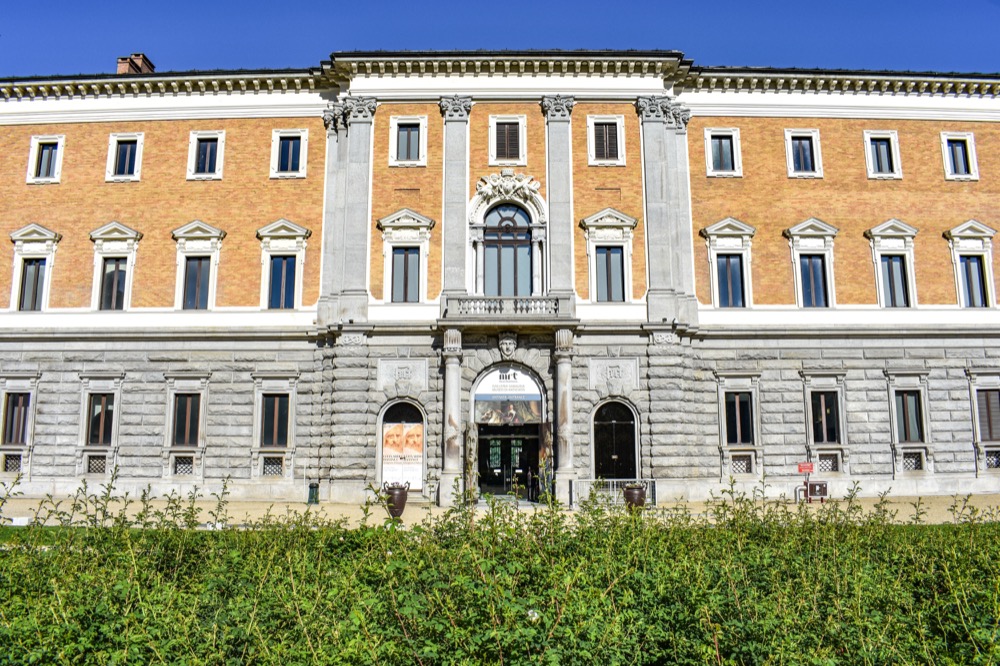 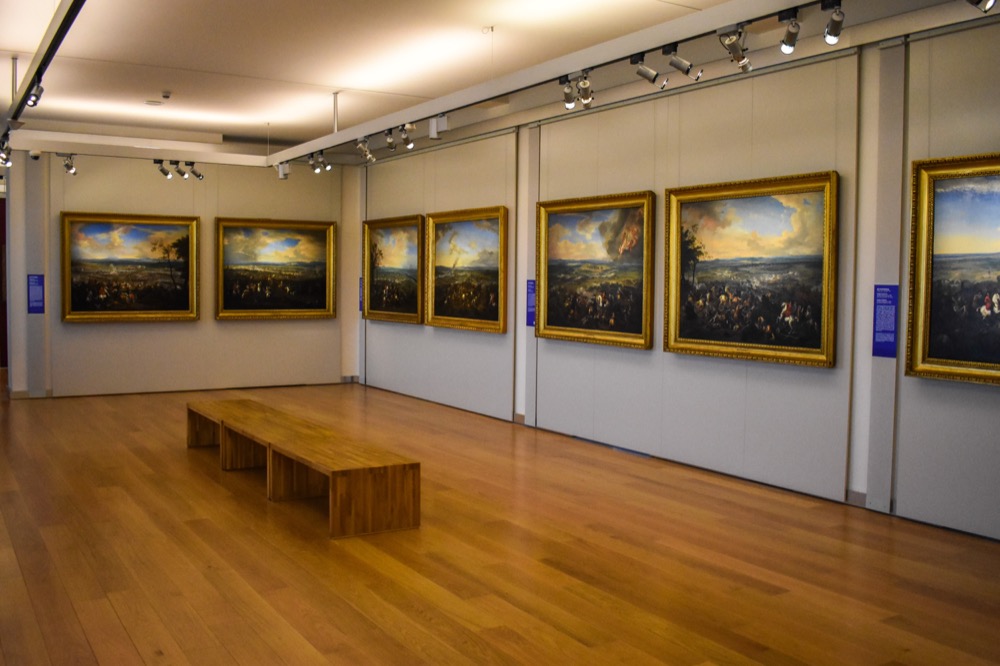 The Galleria Sabauda was established in 1832 according to the will of King Charles Albert, uniting the art collection of Eugene of Savoy with works from the Royal Palace of Turin, the picture gallery of the Savoy-Carignano, and artworks from the Palazzo Durazzo of Genoa, acquired in 1824. Throughout the 19th and 20th centuries, the collection was enriched by purchases and donations. In December 2014, the gallery changed location and its collections were relocated to the New Wing of the Royal Palace (“Manica Nuova” of Palazzo Reale), which was built between the late 19th and early 20th century by the court architect Emilio Stramucci. Chronologically, about 500 works by Italian, Dutch, Flemish and other European artists from the 14th to the 20th century are currently exhibited on four floors.

There’s no doubt that the gallery has rich collections but unfortunately during my visit, almost half of it was closed for some reason. In the next sections, I’ll show you and introduce to you the masterpieces that I saw. 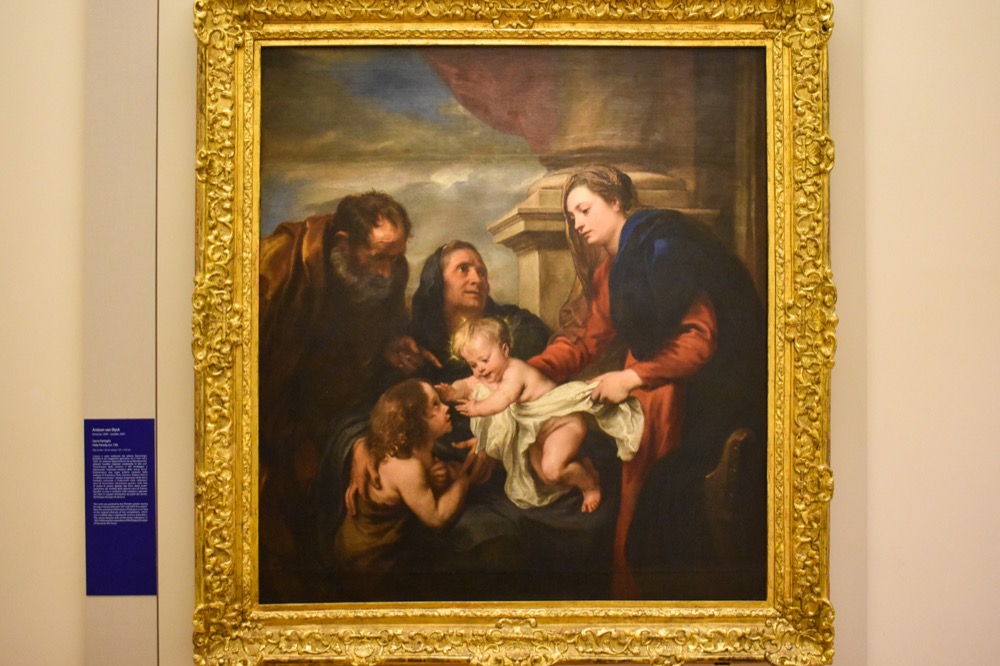 This work was painted by Anthony van Dyck during his stay in Genoa between 1621 and 1625. Two copies from the workshop of Domenico Piola give us an idea of the original intensity of the composition, which was modified in an 18th-century restoration. The surviving preparatory drawings show that in the study phase of the painting, van Dyck drew inspiration from models of  Titian’s sacred paintings. The canvas became part of the Savoy collections in 1824, following the acquisition of the Palazzo Durazzo of Genoa by the Royal House of Savoy.

2.2 The Annunciation by Orazio Gentileschi 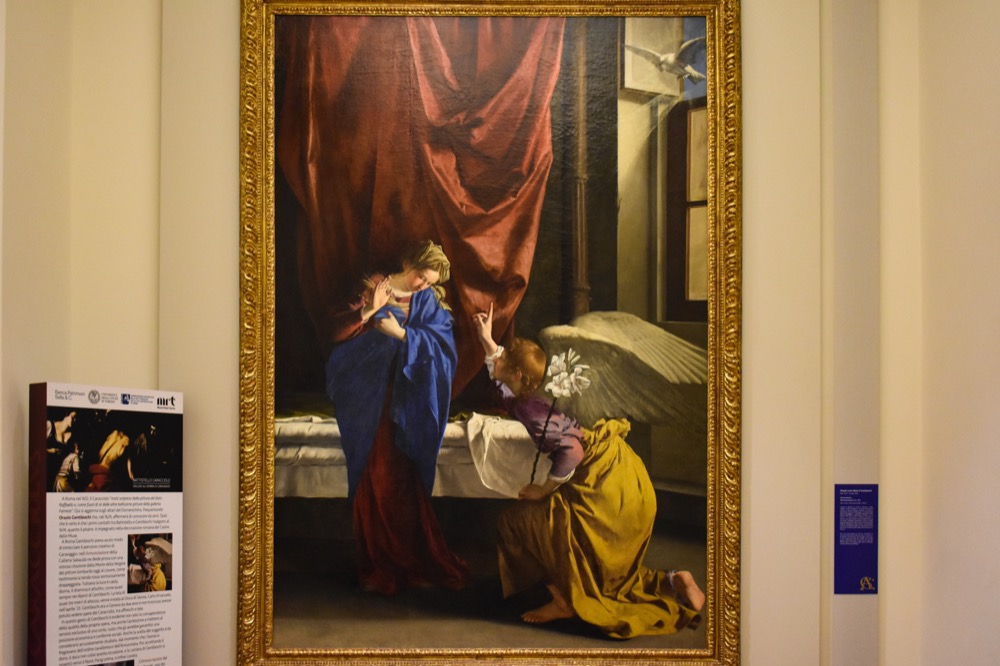 The work was painted in 1623 by Gentileschi in Genoa and sent to the Duke of Savoy as evidence of his artistry. The influence of Caravaggio can be seen in the composition (the red curtain and the unmade bed), as well as van Dyck’s in the use of clear and refined colours; the layout recalls 15th-century Florentine paintings.

2.3 The Three Eldest Children of King Charles I of England by Anthony van Dyck 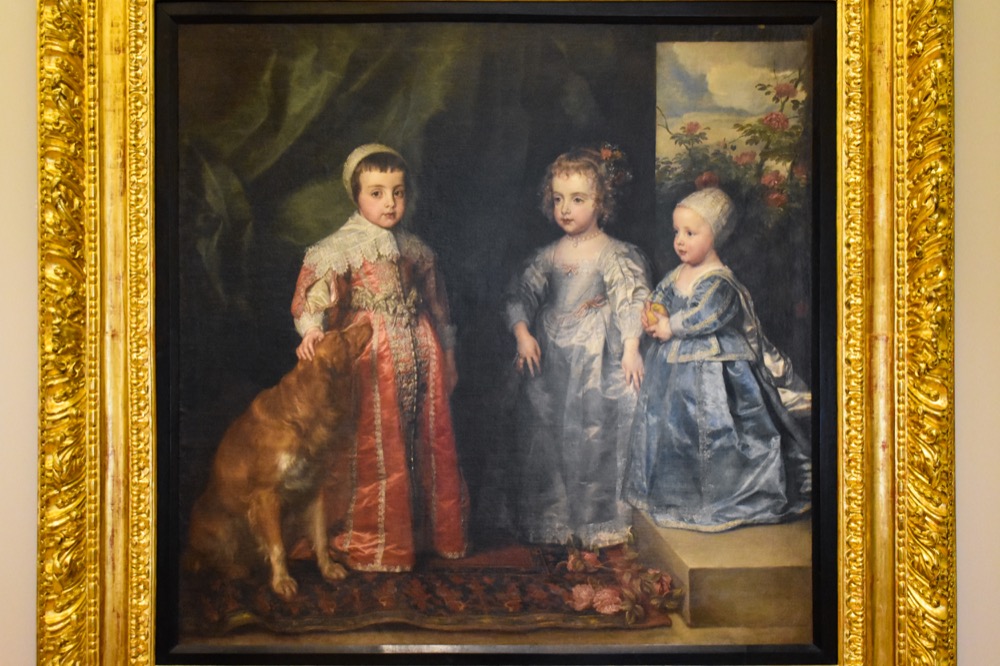 Commissioned by Queen Henrietta Maria of France as a gift to her sister Christine of France, wife of Victor Amadeus I of Savoy, van Dyck created this painting in 1635. It depicts the three eldest children of Charles I, King of England: Prince Charles (born 1630), Princess Mary (born 1631), and James, Duke of York (born 1633). The king, dissatisfied with the work, requested some modifications, which were never made. This is one of van Dyck’s most famous paintings; another version with some differences, which dates to the same year, is preserved in the Buckingham Palace in London. 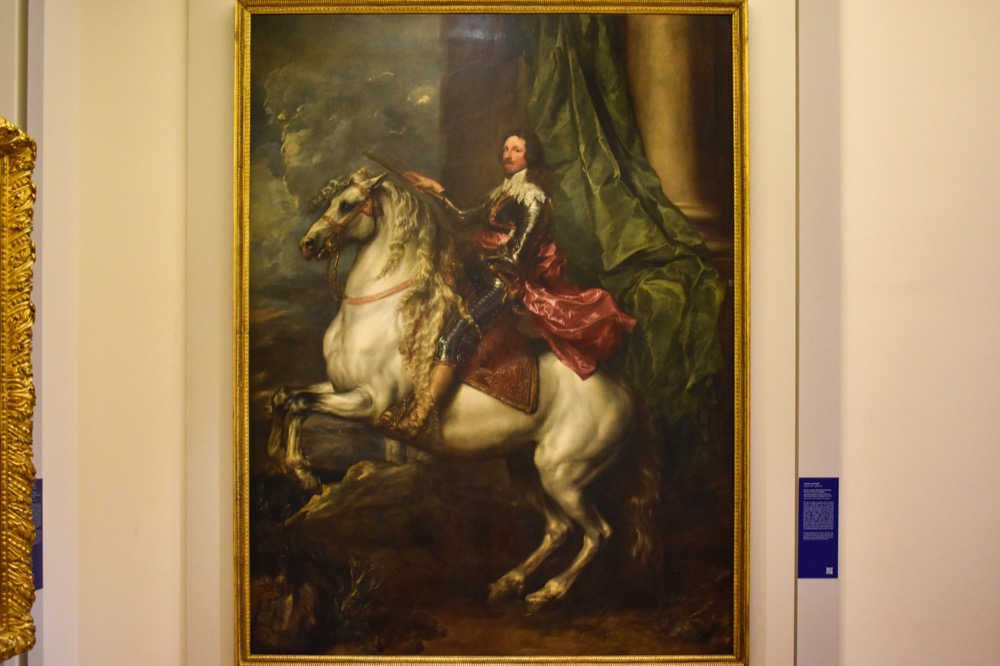 Van Dyck was paid for the canvas in 1635. The sitter is Thomas Francis of Savoy, Prince of Carignano, an Italian military commander and the founder of the Carignano branch of the House of Savoy, which reigned as kings of Sardinia from 1831 to 1861, and as kings of Italy from 1861 until the dynasty’s deposition in 1946. The work portrays him as the commander of the Spanish troops; the drapery and the imposing column underline his power while the cloudy sky in the background recalls the difficulties of his task. Instead of trotting, the horse is shown here taking on the rider, suggesting the total control that the prince had over the political and military situation. As noted by art critics, the portrait is inspired by Titian’s Charles V now exhibited in the Prado Museum in Madrid. 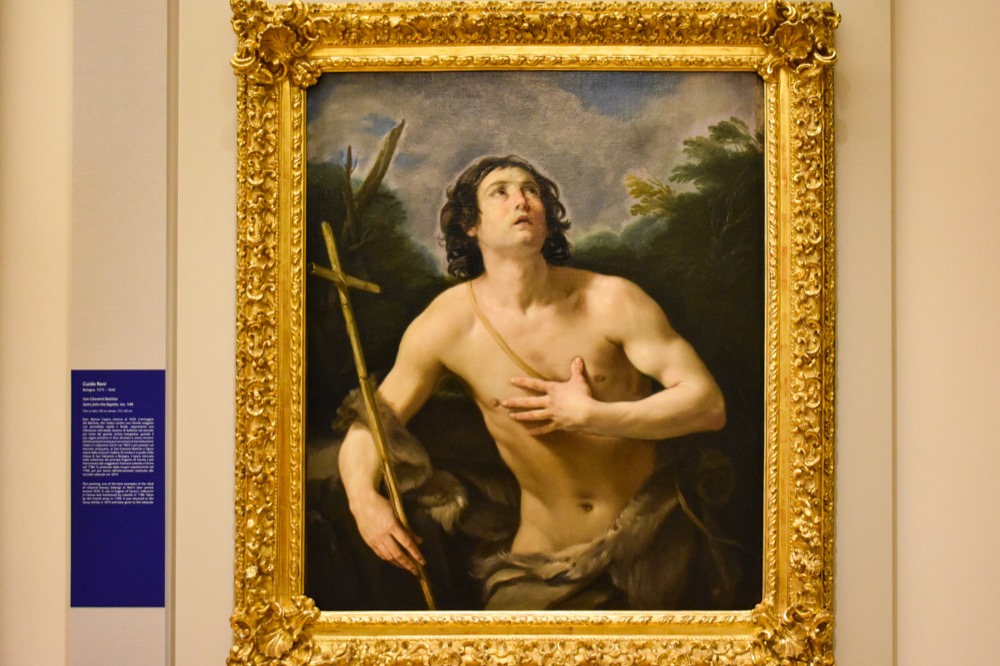 Painted around 1635, the image of St. John the Baptist, which stands out against a background executed with rapid and smooth brushstrokes, reflects the ideal of classical beauty in the later period of the great Bolognese artist. It was in Eugene of Savoy’s collection in Vienna and mentioned by Lalande in 1786. Taken by the French army in 1799, it was returned to the Savoy family in 1815 and later given to the Sabauda. 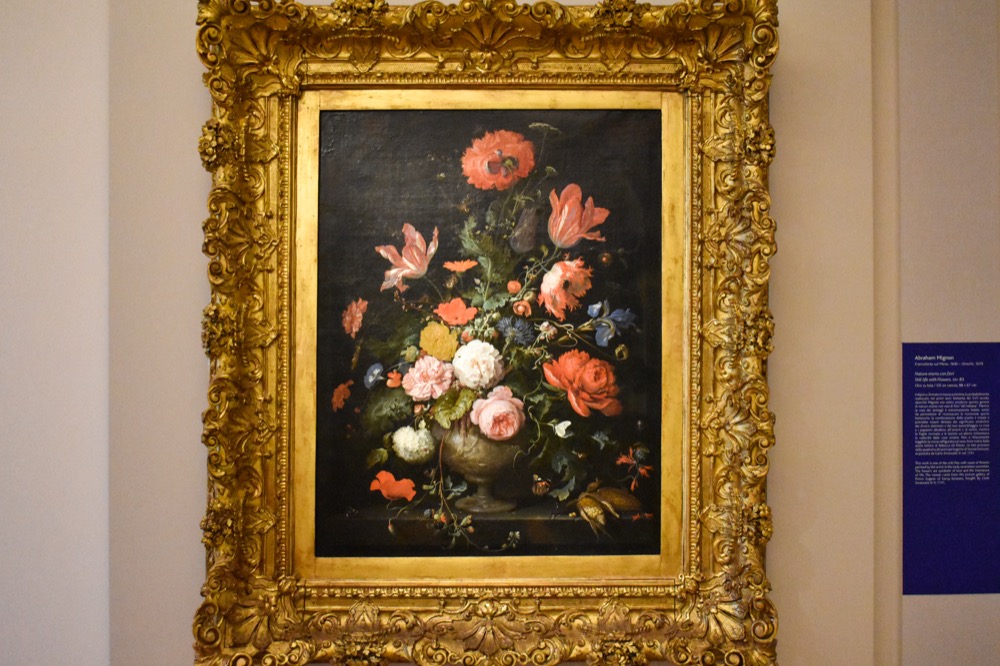 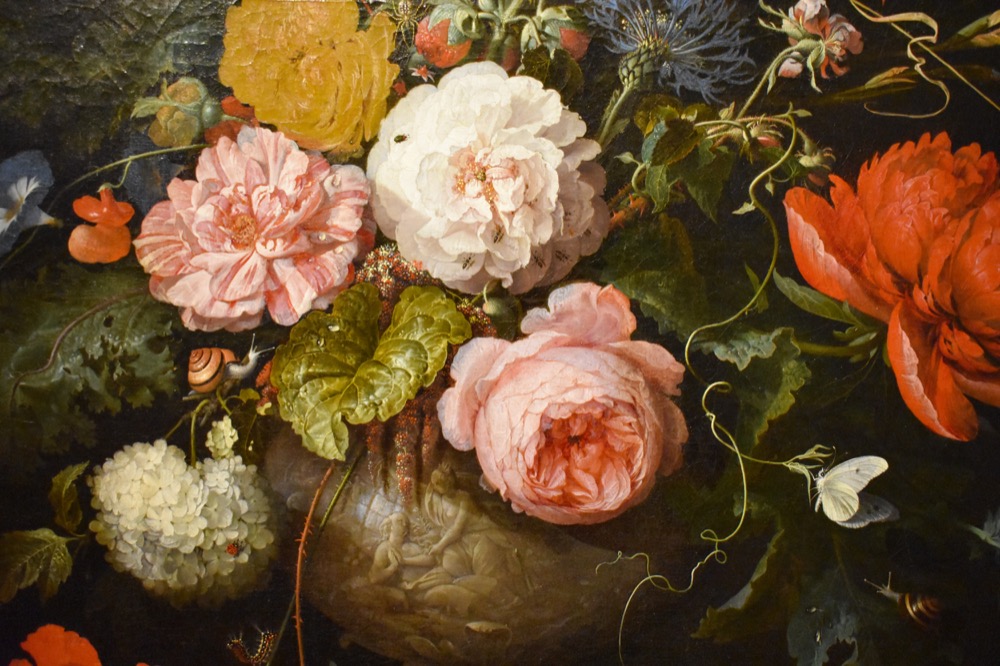 The painting, signed on the lower left corner, was probably executed in the early 1670s. While the rendering of the details is extremely faithful, making it possible to recognise the many botanical species, the combination of the flowers is unreal, which implies that the picture bears symbolic meanings. Roses and poppies allude to love and sleep, while the withered leaves and lesions on the plinth recall the transience of life. Bought by Charles Emmanuel III in 1741, the canvas came from the picture gallery of Prince Eugene of Savoy.

2.7 Hunting Scene near London (formerly The Fall) by Jan Griffier I 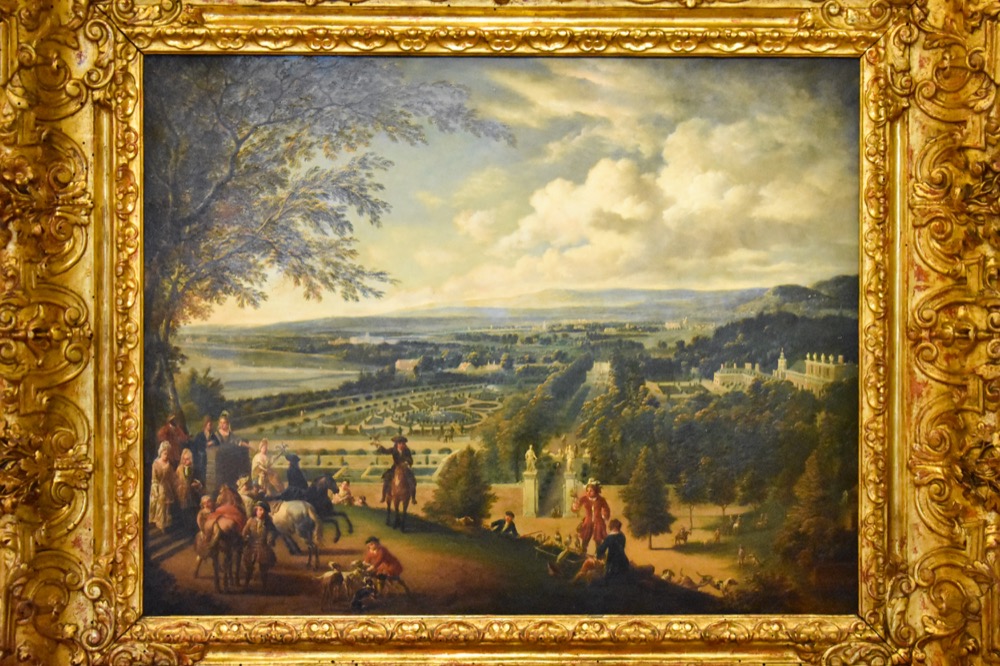 Signed by the artist, this panel was painted in the second decade of the 18th century, belonging to a series of four paintings. Once wrongly interpreted as an allegory of autumn, it combines the meticulous depiction of topographical features with a courtly atmosphere. It came from the picture gallery of Prince Eugene of Savoy, which was bought by Charles Emmanuel III in 1741.

2.8 Madonna and Child with the Infant St. John, St. Catherine of Alexandria and Other Saints by Andrea Mantegna and his workshop 2.9 The Passion of Christ by Hans Memling Memling was commissioned to paint this panel by the Florentine banker Tommaso Portinari in about 1470, probably at the time of his marriage to Maria Baroncelli. For me, it is the most impressive work that I saw in the gallery; depicting in sequence over twenty episodes of the Passion, it allows viewers to pilgrimage to the Holy Land. It was later transferred to the Hospital of Santa Maria Nuova in Florence, then to Cosimo I de Medici’s and Pope Pius V’s collections. Between 1570 and 1572, the latter gave it to the Dominican convent of Bosco Marengo, near Alessandria. In 1814, it was donated to Victor Emmanuel I of Savoy.

2.10 Christ in the House of Simon of Pharisee by Paolo Veronese Somehow, probably because of his Mystical Marriage of St. Catherine exhibited in the Gallerie dell’Accademia in Venice, the moment I saw this painting, I thought of Paolo Veronese. Painted between 1555 and 1556 for the Monastery of Ss. Nazarius and Celsus in Verona, it is a fine example of the early works of the artist and was the first in a series of spectacular depictions of evangelical feasts. Sold at a high price to Giovanni Filippo Spinola and then belonging to the Durazzo family in Genoa, it was purchased in 1824 and taken to Turin 1837 despite the opposition of the Genoese.

2.11 The Trinity by Tintoretto 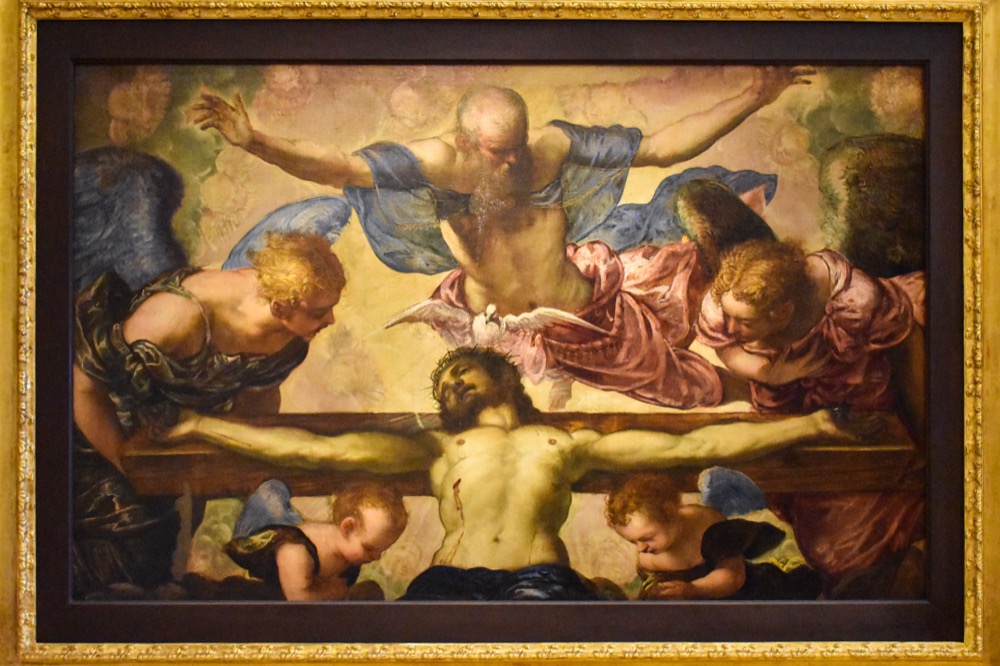 This is a fragment of an altarpiece which escaped a disastrous fire, in which the lower part perished. It comes from the Venetian church of San Girolamo, which burnt down in 1705. The Genoese Gerolamo Ignazio Durazzo probably bought the piece following the dreadful accident. Recent reports indicate that the altarpiece was placed on the altar dedicated to St. Adriano, commissioned by Pietro Alessandro Lippomano and built in 1560. In addition to the Holy Trinity group, the original painting executed around 1561 – 1562 included Ss. Adriano, Francesco and Agostino around the Cross. The fragment was purchased by Charles Felix in 1824 along with other masterpieces from the Palazzo Durazzo in Genoa.

2.12 The Queen of Sheba Offering Gifts to Solomon by Paolo Veronese and his workshop The work, accompanied by a lost Adoration of the Magi by the same artist, was commissioned by the young Duke of Savoy Charles Emmanuel I and came to Turin in 1584. The unusual depiction of a beardless Solomon indicates a tribute to the young client who had just ascended the ducal throne. Give the prestige of the assignment, the design of the whole refers with certainty to Paolo Veronese. However, one recognises in the execution of the work more or less extensive participation of his workshop. In particular, the impressive architectural derails are attributed to his brother Benedetto. 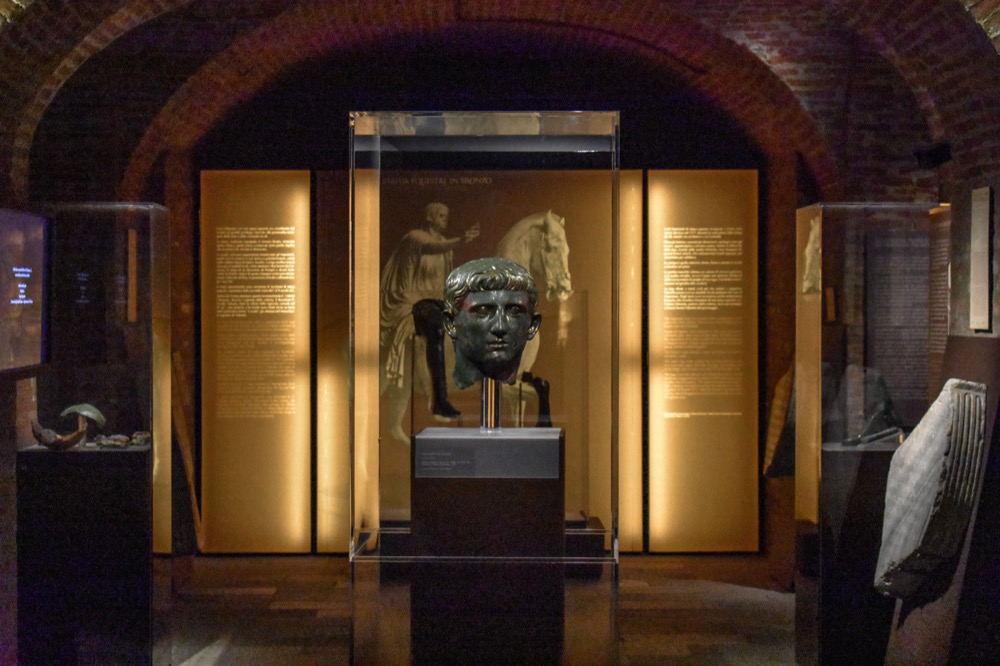 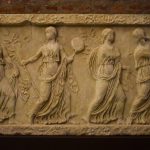 The origin of the Archaeological Museum dates back to the mid-16th century with antiquity collections of Emmanuel Philibert. In the following centuries, they were enriched through donations and acquisitions and relocated from time to time. In 1940, with the final separation from the Egyptian Museum, the new Museum of Antiquities (Archaeological Museum) found an independent home in the basement of the New Wing and in the 19th-century greenhouses of the Royal Palace, where currently the core of the collections is displayed. It shares the same entrance with the Sabauda Gallery and once you enter, just turn left and walk down to the basement. Unfortunately during my visit about half of it was closed. The highlights that I saw include the Drachma of Metaponto, Reliefs with Dancing Maenads, and the Bust of Emperor Lucius Verus from the treasure of Marengo.

The Royal Museums of Turin (2/2) – The Sabauda Gallery, Archaeological Museum and Royal Gardens was last modified: August 29th, 2020 by Dong