Hello everyone! As I mentioned in my previous post, today I’m gonna take you to have a look at one of the world’s oldest shopping malls – Galleria Vittorio Emanuele II and the landmark triumphal arch – Arco della Pace.

First of all, a short introduction of Milan. (If you read my previous post about Milan cathedral please skip the next part.)

Milan is the capital of the Lombardy region, and the most populous metropolitan area and the second most populous commune in Italy. It is also the main industrial and financial centre of Italy and one of global significance. In terms of GDP, it has the 2nd-largest economy among EU cities after Paris, and the largest among European non-capital cities.

Milan is a leading global city, with strengths in the arts, commerce, design, education, entertainment, fashion, finance, and tourism. Its business district hosts Italy’s Stock Exchange and the headquarters of the largest national and international banks and companies. The city is a major world fashion and design capital, well known for several international events and fairs, including Milan Fashion Week and the Milan Furniture Fair. The city hosts numerous cultural institutions, academies and universities, with 11% of the national total enrolled students.

Milan’s museums, theaters and landmarks (including the Milan Cathedral, Sforza Castle and Leonardo da Vinci’s paintings such as The Last Supper, a UNESCO World Heritage Site) attract over 9 million visitors annually. It is the second Italian city with the highest number of accredited stars from the Michelin Guide. The city also hosted the Universal Exposition in 1906 and 2015.

The Galleria Vittorio Emanuele II is one of the world’s oldest shopping malls. Housed within a four-story double arcade in central Milan, the Galleria is named after Victor Emmanuel II, the first king of the Kingdom of Italy. It was designed in 1861 and built by Giuseppe Mengoni between 1865 and 1877.

The structure consists of two glass-vaulted arcades intersecting in an octagoncovering the street connecting Piazza del Duomo to Piazza della Scala. The street is covered by an arching glass and cast iron roof, a popular design for 19th-century arcades, such as the Burlington Arcade in London, which was the prototype for larger glazed shopping arcades, beginning with the Saint-Hubert Gallery in Brussels(opened in 1847), the Passazh in St Petersburg (opened in 1848), the Galleria Umberto I in Naples (opened in 1890) and the Budapest Galleria.

The central octagonal space is topped with a glass dome. The Milanese Galleria was larger in scale than its predecessors and was an important step in the evolution of the modern glazed and enclosed shopping mall, of which it was the direct progenitor. It has inspired the use of the term galleria for many other shopping arcades and malls. On the ground of the central octagonal, there are four mosaics portraying the coat of arms of the three capitals of the Kingdom of Italy (Turin, Florence and Rome) plus Milan’s.

The Galleria connects two of Milan’s most famous landmarks: The Duomo and the Teatro Alla Scala, but the Galleria is a landmark in its own right. Due to its numerous shops and importance as a common Milanese meeting and dining place.

The arcade principally contains luxury retailers selling haute couture, jewelry, books and paintings, as well as restaurants, cafés, and bars. The Galleria is famous for being home to some of the oldest shops and restaurants in Milan, such as Biffi Caffè (founded in 1867 by Paolo Biffi, pastry chef to the monarch), the Savini restaurant and the Art Nouveau classic Camparino in Galleria.

By the way, an interesting story I read from Wikipedia,

In 2012, a McDonald’s restaurant was prevented from renewing its tenancy, after 20 years of occupancy. The restaurant contended that it was the only tenant to be denied the right of first refusal on its new lease, and that the public tender to replace it was “unfair”. McDonald’s sued the landlord—the city of Milan—for €24 million in damages, alleging that the loss of the lease will deprive McDonald’s of €6 million per year in sales. During its last few hours of operation, the restaurant offered free food and drink to over 5000 customers. The McDonald’s restaurant was replaced with the gallery’s second Prada store. McDonald’s renounced its suit against the City of Milan after receiving the opportunity to open a new restaurant in a nearby area. 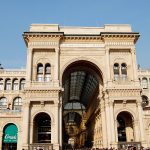 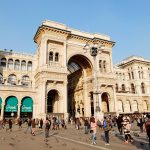 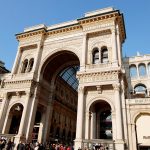 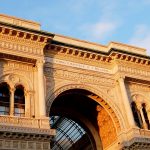 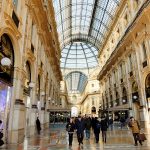 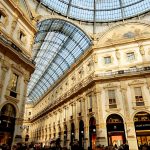 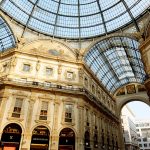 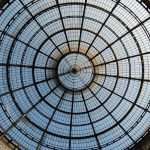 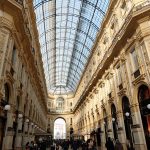 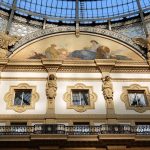 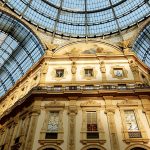 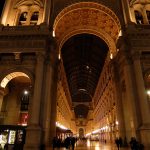 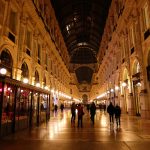 It’s very nice to visit this place, have a cup of coffee and some cake in one of the oldest cafes. If you feel you wanna spoil yourself in such a nice place, you can also have a fancy lunch or dinner here. Don’t be scared, the price is high but not like 500 Euros for a dinner for two or sth so have a nice time here. If you wanna do some shopping, here is a nice place for some luxury brands such as LV and Prada. However, if you want more choices I suggest a big shopping mall right next to it. It’s called la Rinascente. You can find almost all the international brands here.

Porta Sempione (“Simplon Gate”) is a city gate of Milan, Italy. The name “Porta Sempione” is used both to refer to the gate and to the surrounding district, a part of the Zone 1 division (the historic city centre), including the major avenue of Corso Sempione. The gate is marked by a landmark triumphal arch called Arco della Pace (“Arch of Peace”), dating back to the 19th century, although its origins can be traced back to a gate of the Roman walls of Milan.

In 1807, under the Napoleonic rule, the Arch of Peace was built by architect Luigi Cagnola. This new gate marked the place where the new Strada del Sempione entered Milan. This road, which is still in use today, connects Milan to Paris through the Simplon Pass crossing the Alps. At the time, the gate was still called “Porta Giovia”. When the Napoleonic Kingdom of Italy fell and Milan was conquered by the Austrian Empire, the gate was not yet completed, and the construction was abandoned for a while.

The construction of the Arch was resumed, again by Cagnola, in 1826, for Emperor Francis II, who dedicated the monument to the 1815 Congress of Vienna. When Cagnola died in 1833, his project was taken over by Francesco Londonio and Francesco Peverelli, who brought it to completion in 1838.

The gate was the scene of several prominent events in the Milanese history of the 19th century. On 22 March 1848, the Austrian army led by marshal Josef Radetzky escaped from Milan through Porta Giovia after being defeated in the Five Days of Milan rebellion. On 8 June 1859, four days after the Battle of Magenta, Napoleon III and Victor Emmanuel II of Italy triumphally entered Milan through the gate. In his novella A Moveable Feast, Ernest Hemingway mentions the Arch of Peace, expressing the belief that its orientation be parallel to those of the Arc de Triomphe du Carrousel and the Arc de Triomphe de l’Étoile in Paris.

The gate is also the entrance to Sempione Park, a large city park in Milan. Established in 1888, it has an overall area of 386,000 m², and it is located in the historic centre of the city. The park is adjacent to the gardens of the Sforza Castle and to the Arch of Peace, two of the main landmarks of Milan. The very design of the park, due to architect Emilio Alemagna, was conceived with the intent of creating panoramic views encompassing both monuments. 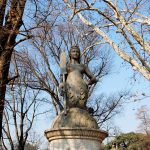 In the park are Arena Civica, the public aquarium, and the Torre Branca tower.

Torre Branca is an iron panoramic tower and 108.6 m high, which makes it the sixth highest structure in Milan. The top of the tower is a panoramic point whose view, on a clear day, may encompass the Milan cityline as well as the Alps, the Apennines, and part of the Po Valley.

I suggest you go up and have a look if you have time. You can only go up by lift and it costs 5 Euros per person. However, sometimes you might need to wait a bit as they (I can’t remember clearly whether they operate the lift or not if there are less than 5 people) don’t take too many people up and down at once for lift capacity reason I guess. Also you can only spend around 6 mins on the top and then you need to go down. Because the top room is with glasses so the pictures are not that great but still nice. The guide was quite friendly though. 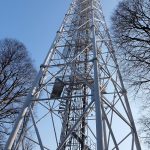 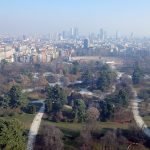 That’s all for today’s trip and in my next post I’ll introduce to you the museums I went to in Milan and the must-see masterpieces in Milan. You know Leonard da Vinci’s “Last Supper”, but do you know Hayez’s “The Kiss” and Michelangelo’s Last piece of work? Well, see you in my next post. 🙂