Hello everyone! Today I’m gonna introduce to you the largest plain waterfall in Europe – the Rhine Falls.

The falls are located on the High Rhine between the municipalities of Neuhausen am Rheinfall and Laufen-Uhwiesen, near the town of Schaffhausen in northern Switzerland, between the cantons of Schaffhausen and Zürich. They are 150 m wide and 23 m high. In the winter months, the average water flow is 250 m³/s, while in the summer, the average water flow is 700 m³/s. The highest flow ever measured was 1,250 m³/s in 1965; and the lowest, 95 m³/s in 1921. The falls cannot be climbed by fish, except by eels that are able to worm their way up over the rocks.

The Rhine Falls were formed in the last ice age, approximately 14,000 to 17,000 years ago, by erosion-resistant rocks narrowing the riverbed. The first glacial advances created today’s landforms approximately 500,000 years ago. Up to the end of the Wolstonian Stage approximately 132,000 years ago, the Rhine flowed westwards from Schaffhausen past Klettgau. This earlier riverbed later filled up with gravel.

About 132,000 years ago the course of the river changed southwards at Schaffhausen and formed a new channel, which also filled up with gravel. Part of the Rhine today includes this ancient riverbed.

During the Würm glaciation, the Rhine was pushed far to the south to its present course, over a hard Late Jurassic limestone bed. As the river flowed over both the hard limestone and the easily eroded gravel from previous glaciations, the current waterfall formed about 14,000 to 17,000 years ago. The Rheinfallfelsen, a large rock, is the remnant of the original limestone cliff flanking the former channel. The rock has eroded very little over the years because relatively little sediment comes down the Rhine from Lake Constance.

The nearest city is Neuhausen am Rheinfall, where tourists can also view the Wörth Castle. Boat trips can be taken up the Rhine to the falls and the Rheinfallfelsen. There are also viewing platforms with a spectacular view of the falls built on both sides of the Rhine. These are reached via steep and narrow stairs. Guided tours of various lengths start from Schloss Laufen on the Zürich side of the falls. The Rhine Falls are easily accessible by car, bicycle and public transport (SBB railway station “Neuhausen am Rheinfall” on the northern side of the falls and SBB railway station “Schloss Laufen am Rheinfall” on the southern banks of the river). Large pay-parking lots are located on both sides of the falls.

In 1840, author Mary Shelley visited the Falls while on a tour of Europe with her son. She described her visit in a travel narrative that she published in 1844, Rambles in German and Italy. She says:

A portion of the cataract arches over the lowest platform, and the spray fell thickly on us, as standing on it and looking up, we saw wave, and rock, and cloud, and the clear heavens through its glittering ever-moving veil. This was a new sight, exceeding anything I had ever before seen; however, not to be wet through, I was obliged quickly to tear myself away.

How to get there:

Of course you can drive there and there is quite some parking space. However, since the public transport in Switzerland is so convenient, why not taking an advantage of it and going to the Rhein Falls by train? SBB train station “Neuhausen am Rheinfall” is directly located on the northern side of the falls and station “Schloss Laufen am Rheinfall” on the southern banks of the river (You need to pay 5 CHF for ticket if you wanna visit Rhein Falls from this side). I usually go from Zürich to Winterthur and then to the station “Schloss Laufen am Rheinfall”. When you get off the station, you can either take a lift or walk to the ticket office close to the Schloss Laufen Castle. The signs are quite obvious and easy to follow. For more info you can have a look at the picture above or click here.

Southern banks with Schloss Laufen Castle and touching distance to the waterfalls:

If you wanna experience the whole Rhein Falls closely, take a round trip in the Rhine Falls basin or a boat ride to the rocks in its midst and climb up the rock.

Some tips from my two trips

As you can see from my pictures above, I went the in winter and summer. I went to the same side of the falls but it feels absolutely different in these two different seasons. I’ll attach the pictures I took first, and then you can decide when you should go. 🙂 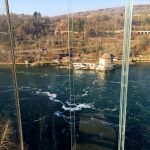 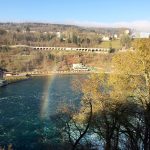 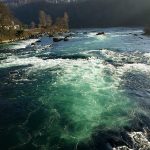 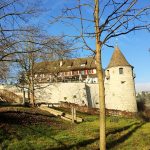 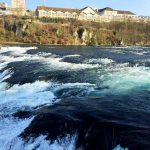 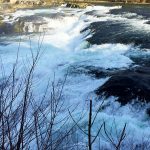 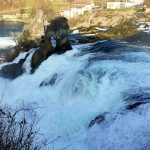 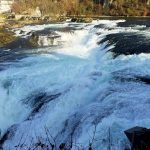 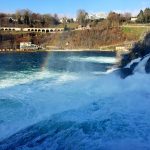 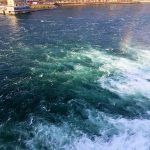 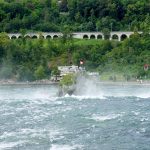 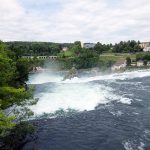 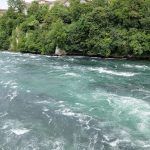 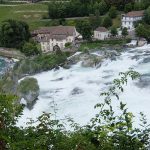 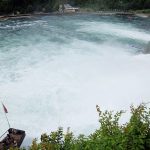 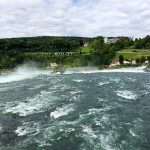 Those pictures were taken respectively in winter and summer and I believe you can see the difference. I can’t say which is a better season to visit the falls, but if you wanna take a boat trip to get closer to the falls or even the rock in the middle, I suggest you go in summer.

After you buy the tickets and walk towards the direction of the Schloss Laufen Castle, pay attention to a downhill path on your right side before you reach the castle. You will be able to reach a bridge where on one side you can see the lake, from which the water of the falls comes from, and on the other side, you will see the upper part of the falls.

After you pass the automatic ticket control, you just need to follow the path down. However, pay attention to a cave on your right side on your way down, it should be a little more than half way and you should get in. After a short walk, you will get to a “balcony” where you can watch, hear and even touch the falls. Be careful, the water there is really rough.

Probably I’ll go there again next summer and visit the northern banks of the river this time. Hmmmmmm, maybe also take a boat and feel the refreshing misty spray from the falls.

I also hope this post gives you some useful info when you plan your trip to the Rhein Falls and I wish you a great journey. 🙂